Once again Monte kicked off in front of a large following of Monte fans hoping to make it 14 games without losing.

After only eight minutes Monte took the lead when Carlos Lorente received a fabulous pass from Vaz, and broke through from the right-hand side and beat the goalkeeper with a fierce drive. From the kick-off Atletico lost possession and Carlos Ventura ran through to double the lead leaving Monte two up after only nine minutes.

Atletico started to get on top and it needed a good double save from Dani to retain the Monte lead. One minute later Dani was called on to make another great save this time in the top corner. Vaz then sent a shot just inches past the post with their goalkeeper well beaten. Over the next few minutes both goalkeepers made excellent saves before the Atletico number 9 broke through from a very suspicious offside position, and reduced the lead on 32 minutes. The home side were kept in the game when their goalkeeper made yet another good save.

Much to the relief of the Monte fans the Atletico centre forward missed 2 great chances just before half time.

The second half started like the first with Vaz being pole-axed and again needing treatment. Moments after Carlos Lorente fired just wide. 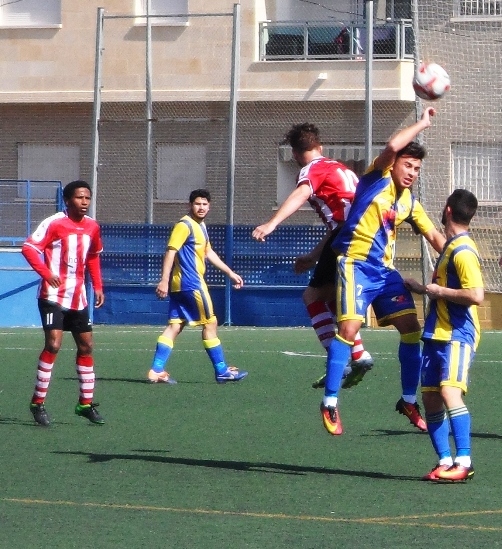 Monte were awarded a penalty. Their goalkeeper saved what could only be described a weak attempt from Vaz of all people. We all wondered if this would be a game changer. On 65 minutes Dani stood and watched the ball roll for a dead ball, only for it to be pulled back across the goal for an Atletico forward to tap into an empty net. 2-2 game on.

Immediately, Monte made a double substitution with German and Pley replacing Coco and Fran. Monte then picked up the pace and had 2 near misses before Dario replaced Dimitri. Dani once again made a great one-handed save from a close range and from the kick up field Vaz made up for his penalty miss by bursting through 2 defenders to restore our lead on 85 minutes. Monte then made their 4th substitution with Alberto replacing Carlos Lorente. In the 2nd minute of time added on Carlos Ventura got his second goal by beating the defence and rounding the goalkeeper before clinically finishing the move off to seal another win for Monte.

Overall a very physical game, with 8 yellow cards issued to the Atletico team resulting in a double yellow for one of them. Not one of the yellow cards was for any of the 8 recorded fouls on Vaz, 2 of them requiring on-field treatment. Monte received just the one yellow card. Vaz was everywhere on the field and it came as no surprise that he collapsed with exhaustion in extra time.