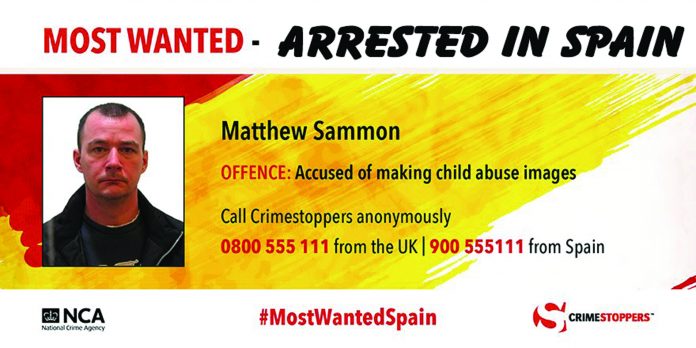 Matthew Sammon, one of the British fugitives from the Operations Captura campaign arrested in Spain, received a jail sentence on Wednesday 25 January after being extradited to the UK.

Sammon was located in Fuengirola, Costa del Sol, Spain, the same day his details were released to the public as part of the Operation Captura campaign run by the UK’s National Crime Agency and Crimestoppers in October 2016. He was arrested by the Spanish National Police after a tip off from a member of the public.

At the time of arrest, Sammon was the 77th fugitive to be arrested out of 96 publicised through Operation Captura.

British Ambassador to Spain, Simon Manley commented “The arrest, extradition and sentencing of Matthew Sammon, would not have been possible without the valuable tip off from a member of the public in Costa del Sol, and without the excellent co-operation between the Spanish and British law enforcement authorities. The sentence this week shows the value of the Operation Captura campaign, and Spanish and British authorities will continue working closely together to tackle crime.”