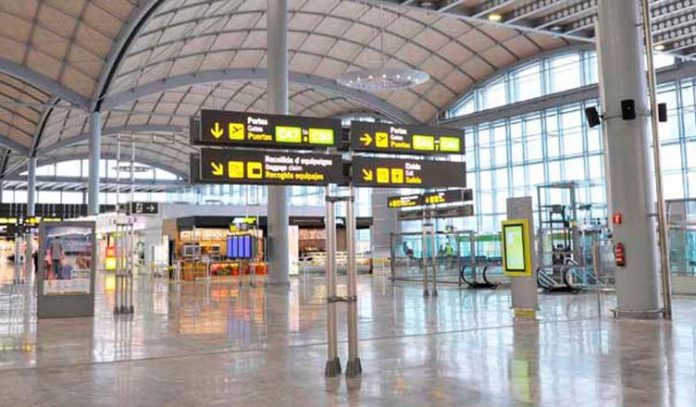 AENA confirmed last week that they have spent almost a million euros repairing leaks to the flat roof on the new International Airport building since it was first opened 5 years ago.

A spokesman said that the total investment is now 940,000 euros after a public tender to carry out repair work was recently awarded to the company ACSA. He said that the outstanding repairs to the roofs need to be urgently completed before the winter rains hit the terminal in earnest.

As a result, ACSA, is now placing protective screens in parts of the terminal ceiling,  both to protect the building from the weather and to enable their workforce to carry out work at height, without causing any additional discomfort to passengers.

Despite the scarcity of rainfall in the Province, the leaks were first noticed by staff few months after the building was first opened. Local maintenance staff carried out minor repairs at the time but now it is felt by the management company that the situation is turning into a major project.

The new El Altet terminal was opened by the then Minister of Public Works, José Blanco, on 22 March 2011, a little more than five years ago, after an investment that had finally reached 628.67 million euros.

The works, in fact, started in September, but it has not been until now that they have aroused the curiosity of the thousands of employees of the terminal and the different airlines, the tourists and business travellers.

AENA said that they are not able to specify the duration of the works.