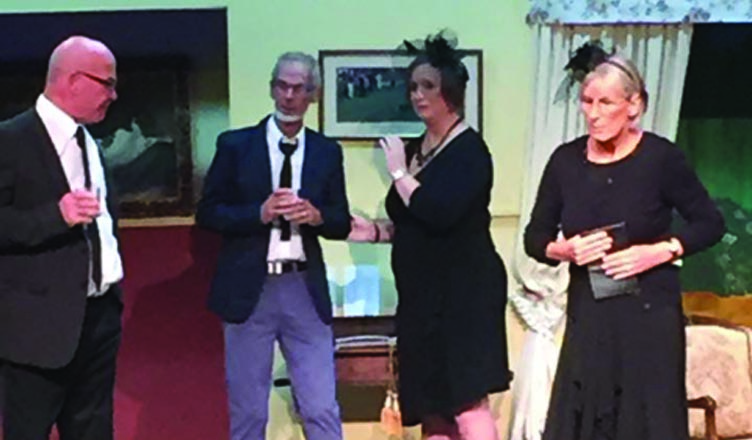 This was the second offering from this talented and professional group (Actors Community Theatre Society) formed by Tony and Angela Godard to provide ‘a professional drama company in the area’.

Their first production, Mark Camoletti’s ‘Don’t Dress for Dinner’ performed at the Cultural centre in Benijofar earlier this year was extremely well received. On this occasion A.C.T.S. had chosen ‘Wife After Death’ by Eric Chappell. It was also staged in Benijofar on three nights recently with a donation being made to the Benijofar Crisis Appeal. The play was directed by Sue Stabler and Albert Stokes. 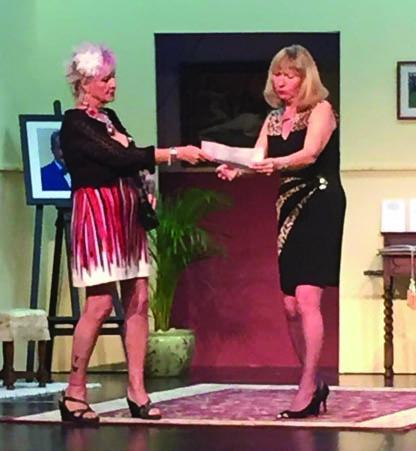 Eric Chapple was a prolific BAFTA winning writer creating plays and scripts for both the theatre and television. He is perhaps best known to most of us as the author of the award winning television series ‘Rising Damp’, starring Leonard Rossiter, Francis de la Tour and Paul Jones.

‘Wife After Death’ is one of those plays with what appears to be a very simple and straightforward idea. Comedian and ‘national treasure’ Dave Thursby has died and his friends and former colleagues are gathered together with his wife in his home to pay their respects. It all sounds rather dull and predictable, however all is not what it seems. Appearances can be deceptive and as the play progresses the relationships the characters had with Dave are exposed and his true feelings for them (which were not very pleasant) are revealed. All of this is added to and to some extent catalysed by the arrival at the funeral of a mysterious lady. She turns out to be, not just a former wife of Dave Thursby, but the only legal wife as their marriage was never officially ended. 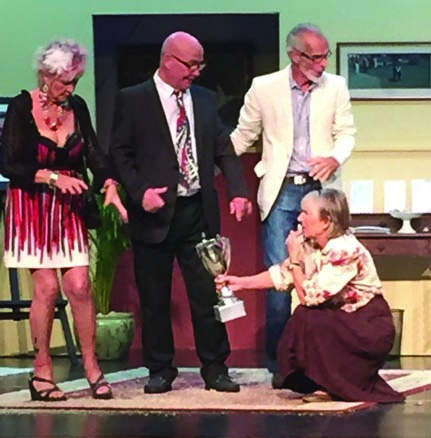 The play opens with Harvey (Dave’s scriptwriter) played by Ian Vallender talking with his wife, Vi played by Michelle Edwards and reflecting on his relationship with Dave. Harvey sees himself as Dave’s best friend and close confidant. Little does he know his wife was having an affair with his supposedly best pal. It is also revealed to him that far from being his friend Dave didn’t like Harvey at all and was about to drop him as his scriptwriter.

We are then introduced to Dave’s manager, Kevin, played by Keith Woznica and Dave’s wife Jane played by Lesley Luker. Kevin like Harvey is a man with an exaggerated sense of his own importance believing he was responsible for Dave’s success, fame and fortune. Unfortunately it appears that Dave also had no time for Kevin and was about to fire him as his manager. To make matters worse Kevin’s wife Jane was also having an affair with Dave. As the curtain comes down at the end of the first act Harvey is heard to say ‘do we ever truly know anything about anyone’.

In contrast Dave’s wife Laura played by Robin Smith, appears to be unaffected by her husband’s bad behaviour but the arrival of Kay played by Eileen Hamilton puts an end to that. Kay reveals that she is Dave’s legal wife and his marriage to Laura was bigamous. She describes Dave’s early career and his ruthless self-seeking ambition; a severe contrast to the charitable works and well-loved stature of his later life.

With relatively few actors and long wordy dialogue this is not an easy play to pull off. Described as a comedy there are indeed many funny moments in a beautifully crafted script. Many of them though are bittersweet and certainly make the audience reflect on what constitutes the true nature of relationships and how well we know our friends and acquaintances. There were very good performances from all the cast who were also well balanced acting together and produced highly believable characters . We must not forget either all those working behind the scenes and front of house. The set was wonderfully executed and lit and as usual with this group the front of house management was warm and efficient.

Once again all credit to A.C.T.S. for putting on another first class production which was clearly enjoyed by the packed audiences. Make sure you look out for their next production anticipated in the spring of next year.