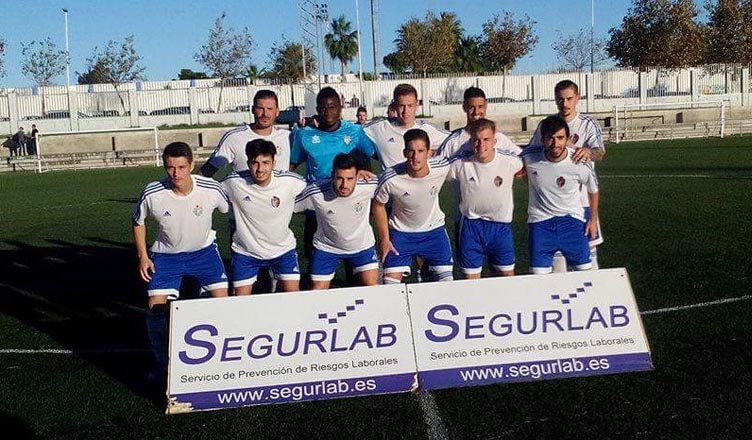 Last week’s resounding victory at Segorbe lifted Torry off bottom spot in div 3, giving them a much needed psychological boost in their quest for survival in this division.  But one swallow doesn´t make a summer, and more of the same is required if their objective is to be achieved.

Silla CF were the latest visitors to Nelson Mendela stadium, arriving fresh from a home defeat by Alzira, and lying 8 points clear of Torry in 13th place, they are no push overs.

Founded in 1927, Silla are playing in this division for the first time in their history, and must be hoping that their stay is not confined to that of a solitary season but it seemed as though they hadn’t read the script as it was the home side that got off to the much quicker start.

They looked altogether sharper than the visitors from the outset and  were rewarded on just 5 minutes when Hugo controlled a cross from Lewis, out wide on the left, to chip Lucas in the Silla goal.

Having got in front so early on Torry did well to maintain their lead in a pacey and open first 45 with both keepers kept busy in an entertaining half. Lewis curled a wicked shot just around the post midway through the half before Silla’s Coke blasted over from a good position and just before the interval Hugo should have done better when set up once again by the industrious Lewis.

The effort was to prove the goalscorer’s last real opportunity as seconds after the restart the big centre forward picked up an innocuous injury and was quickly replaced by the midfielder Eugenio.

Although a blow to the home side Torry kept their foot on the gas despite a much busier opening by their opponents and when Lewis put through Matheus on the hour mark, with just the keeper to beat, we all thought the narrow lead was going to be extended but inexplicably Matheus, who had been virtually word perfect to that point, completely fluffed his lines.

As the home side continued to have the better of the exchanges, it was only in the last few minutes that Silla began to have any belief as they finally took the game to their hosts.  It really was backs to the wall with the hand of Buba keeping the points secure for Torry.

One save, from a Carles header, really was out of the top drawer, finally turning out to be the difference between the two sides, as Torry hung on for an extremely valuable win.

With only 3 players on the bench the situation for Torry should be better next week, for their trip to Torre Levante, following the return from injury of Pastor and the transfer clearance of their 3 recent signings.