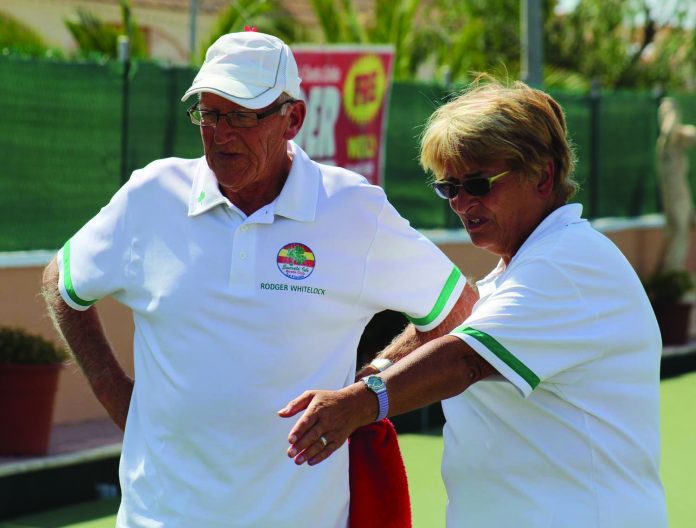 On Monday The Pintos were entertained by Emerald Isle Neptunes and a scorching morning it was too. We were up against a strong team, with a mat that can be a little tricky for the unwary, as many are. But the play was good and the atmosphere friendly as always. We came away with just the one rink, though that is no reflection on the teams play.

In the afternoon The Broncos travelled to Vistabella to play their Eagles, an away fixture is always tough and is made more difficult by very good opponents. They were certainly not shamed in coming away with the one rink, several being close.

Friday morning found The Raiders playing host to Montemar Toreadores and a splendid morning it was, great weather and even better company. All played well with The Raiders taking 4 rinks and the overall shots, with one rink only losing by just the one shot, a really good result all round. Edward Elsam, Tricia Elsam and Shirley Edwards 15-16. Peter Blackburn, Malc Elmore and Keith Longshaw 32-7. Pam Harris, Brian Yates and Brian Harris 18-13. Ngaio Baldwin, Terry Buswell and Gary Newson 11-36. Iain MacMaster, Dave Haynes and Rob Clark 19-14. Bob Easthope, Graham Day and Richard Needham 20-11.

Friday afternoon brought a visit from La Marina of The Dolphins, who are always a pleasure to play, regardless of the bowls. Although many of the results belied the nearness of the matches, The Mustangs took all the rinks and hence the overall shots. But the home mat is always an advantage, particularly when we have changing temperature and cloud cover.  Judy Foley, Keith Cunningham and Geoff Jones 26-11. Barbara Jones, Sheila Cooper and Carolyn Harris 29-18. Jim Taylor, Irene Thomson and Eddie Thomson 26-9. Ann Taylor, Malc Sykes and Jim Gracie 19-12. Maxine Wright, David Whitworth and Rod Wright 36-12. Henry Ryder, Jan Bright and Richard Lee 38-9. For membership details contact Brian Taylor on 965077093 or  at briantaylor_es@yahoo.co.uk or Carolyn Harris on 966774316 or at elranchobowls.secretary@gmail.com 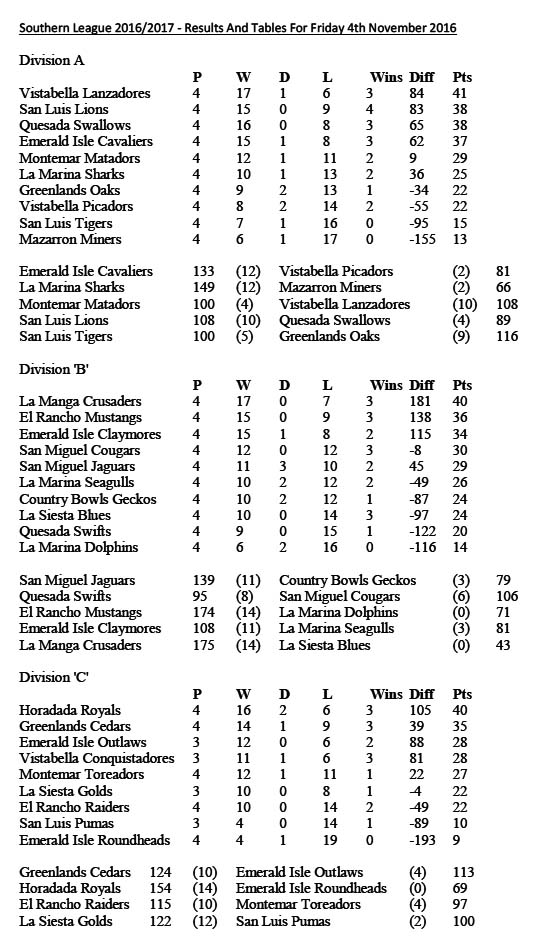 A tough and close match played out in glorious weather with both teams winning on three rinks it came down to shots. Which were equally close with the Toreadors winning 97 – 93 Country Bowls. Toreadors 8 points 6 points Flamingos 6 points.

Monte Mar away to San Luis although Monte Mar fought hard the end result was not good. Shots Monte Mar 65 – 94 San Luis. Points Monte Mar 0 – 12 San Luis.  After a disappointing result we all enjoyed laugh and a lovely meal with good company.

Monday the Emerald Isle Neptunes played host to El Rancho Pintos and came out on top by 12-2 and also in the morning the EI Saturns played away at La Siesta Pioneers, the home team taking the game 12-2 and the aggregate of 118-87

The Titans where away at La Marina Pathfinders. In what looked like a tough game the outcome was a home win 111-105 with a 3-3 end in game.

The Winter league took EI to La Marina on Wed and the Isle came away with a good win 9-3 and an aggregate of 99-76,but the home team took the Berleen game 21-18

In the Enterprise Division the Maples were away to MonteMar Matadors, After a very close game the final result was……Total shots for – 96.  Total shots against – 98.  Points for – 6.  Points against – 8.

In the Discovery Division the Sycamores away to San Luis Romulans and came away with a good result. The final score was …Total shots for – 115.  Total shots against – 89.  Points for – 10.  Points against – 4.

On Saturday we had the second leg of the Friendship Shield against Monte Mar.  They won the first leg and we won the second which gave us an overall win by 13 shots. Well done us.  We had a lovely visit on Sunday from a Mojacar touring team with the Club winning overall and a lovely meal provided by Louisa and her team with many friendships forming. A very good morning for all involved with the right result provided by a friendly LMBC team playing in the spirit of bowls.

In the Enterprise League the Explorers jumped up into third place after beating San Luis Trekkers 14 – 0. Well done to all rinks.

Pathfinders had a great game versus Emerald Isle Titans winning 8 – 6.  Winter League saw us still struggling but we did get one point extra this week as we only lost 9 – 3 to Emerald Isle.   The Berleen team did well and won but only just and the winning skip was once again, Barry Sadler. (Still on his run.)

At the lovely meal afterwards the engagement of Ann-Marie Stevenson to Drew Gerrard was announced.

Thursday saw the prestigious Premier 20 played. Unfortunately all 4 rinks lost over at Quesada but it was much closer at home, winning 3 of the 4 and the losing rink lost by one shot. So we wish Quesada the best of luck in the next round.

The Dolphins swam over to El Rancho only to find the Mustangs in mighty form and sank beneath the waves with all rinks losing.

The Seagulls for once didn’t fare that well away at Emerald Isle where Claymores thrust and cut them to pieces with an 11 – 3 score line. BUT the Sharks came on song and easily beat a Mazarron side by 12 – 2.

The Apollos go top of the league with a 10-4 win away at San Luis Comets. Top Spot this week goes to Barbara and Jack Cooper with Irene Mangan winning by 25-10  closely followed by Dawn Taylor, Pat Moore and Brian Fraser winning 22-12.

Good news too for the Pioneers winning at home against Emerald Isle Saturns by 118-87 giving a 12-2 scoreline. Top rink went to Dennis Andrew, Penny Porter and Roy Millward winning 21-11 closely followed by Jean James, Gordon Dall and John Porter with a scoreline of 23-15.

The Winter League team entertained the always strong Javea Green and it was the visitors that triumphed by 3 rinks to 2 with a scoreline of 79-105.Points 4 to La Siesta and 8 to the visitors. The winning rinks for La Siesta were Penny Porter, Tony Campbell, Tony Dalton and Pat Reilly 29-7 and Irene Laverick, Jean Hepehi, yours truly and Harold Charleton who played an immense game at skip.

The Blues took the long trip to La Manga with an understrength team with several squad members being unavailable. This was reflected in the result of a whitewash defeat by 43 shots to 175.

The Golds entertained near neighbours San Luis Pumas. Top Rink for the Golds went to Gordon Dall, Rab Logan and John Clarke winning 34-9. Four further rinks won with narrow scorelines bringing an overall victory to La Siesta by 122 shots to 100 and achieving victory by 12 points to 2.

Again a mixed week but some better results for our teams, hopefully we can keep moving forwards.

The Berleen team, after several close finishes, so far with no points, this week had a good result: Steve Simmons, Jo Pering, Vic Slater, Barry Edwards 25-20, taking the 2pts.

The Pulsars expected a hard game at San Luis against the Klingons, but managed to come away with 3 points!!  Well done to Eileen McLaren, Tom Dalgleish, Eddie Cowan who won 22-14 and Pat McEwan, Bill Knight, Dave McEwan who drew 14 all.

WASPS on Wednesdays afternoons are also very popular, come along at 1.30, 5 euros for shoes, woods and tuition if required.  Suitable for bowlers of all abilities.

C Division Conquistadores had a bye.

Premier twenty v Emerald Isle. Vistabella won the Pairs & drew the Rinks at home and won the Rinks away at the Isle, sadly that’s the end of the road.