Sonya and team gave a warm welcome to the Jaguars and they enjoyed a very close match.  Dickie, ‘Peters and Leah’ took on Simone (121), Tracey and Hilda in the first triple and gained their first point with Peter’s D1.

Captain Patty Poo (80, 71), Lesley ‘EAGLES!’ (77 x 2) and Wendy Woo gave a valiant effort in the 2nd triples but it was Terry, Sonya (77) and Karl’s T5-D3 finish that gave them their 2nd leg.  The highest scorers from the Jag’s first two triples were Simone, EAGLES! and Patty Poo and their combined efforts with de Lacy’s D1 got them their first leg over John, George and Dickie- shame they didn’t have a Paul or Ringo as we could have been ‘Beatled’.

Tracey Simpson (72) and de Lacy were first up in the pairs against Karl (78) and Terry (86) and de Lacy checked out S10-D5 to level the score-line 2-2.  Patty poo (84) and Hildy-Do-Dah’s D2 in the 2nd pairs took them ahead for the first time despite a reasonable performance from Captain Cooper and Peter (79). John and the lovely Leah (D1) then levelled it again at the half way stage against Wendy Woo and Lelly-Bear EAGLES!

After a tasty bite and some gaspers for the raspers we all ascended into the now air-conditioned rafters for the singles matches.  Both teams needed to take 4 out of the 6 singles to be the first to 7 games so it was going to be hard fought. 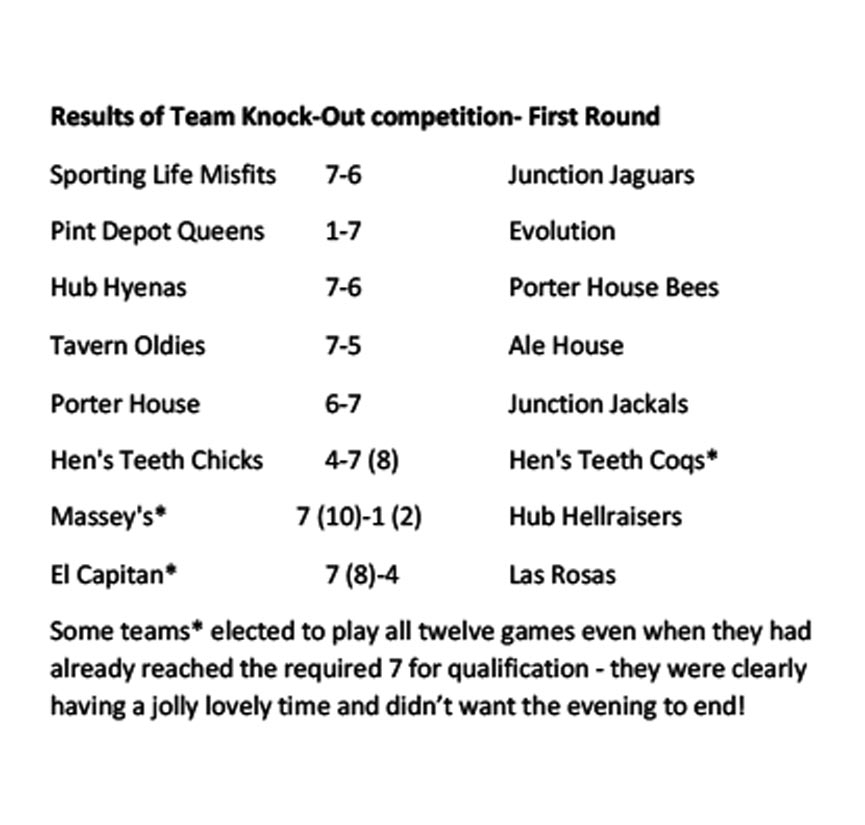 Poo Bear eventually succumbed to George’s 81, 101 and D6 finish but then Hilda beat Leah (140) with a nice D15. Level again, ex -ladies champ Simone (83, 77, 79) faced ex-Ladies champ Sonya (95) in a marathon of a match where both ladies were making little impression on the D1, but de Lacy finally found it when she could drag herself away from the air-con for long enough.

The Jags ahead for the 2nd time could maybe see light at the end of the tunnel at 5-4 but Dickie put paid to that with S2-D1 to even it up again.   Wendy Woo then did the honours with D8 in the penultimate game but Karl’s D2 made it 6-6 despite EAGLES sterling performance with 120, 100.  So the golden game 701, 6 verses 6, would truly decide this Team KO and it was Karl who did the business with a first shot at D8.  Well done to the Misfits and thanks for a great-spirited night.

Another 13 -leg game was taking place at the Porter House where the home team faced the equally- skilled Jackals. Siddie the Eel-Man, Toddy and Nash took on Nikolov, Rutter and Wright and the bolshie Bulgarian opened up the Jackals account with a superb T20-D12 check out.

Hayes, Roofrack and Cocky were up next against Galloway, Elvery and Gildea and it was Galloway’s smooth S8-D4 that was hard to swallow for the Porters. Cocky, Cross and Toddy lost out to Rutter, de Lacy and Nikolov’s T17-D13 in triple #3.  Porters’ Nash (D12) and Hayes snuck one back in the pairs against Galloway and Rutter but then Nikolov with de Lacy’s unconventional but entertaining S1-S19-Bull were more than a match for Roofy and Toddy.

Cross and Cocky’s (T17-S8-D4) brought the halfway score to 2-4.  After all those little sausages and sarnies, the Jackals lead out with Nikolov versus Cross and the latter may well have been as, once again, the be-flip-flopped Bulgarian had an impressive 3-dart finish this time closing 108 with T20-T8-D12.

The ever-reliable Rutter’s D20 put paid to Cocky in the second singles bringing the score-line to 6-2.  Then, teetering on the brink of a win, the Jackals lost all the next games to Tufty’s D2, Roofy’s D20, Gnasher’s D5 and finally Cap’n Sanderson’s D10.  It was captain de Lacy of the Jackals that scooped the Golden 13th game with a D4 seeing them through, by the skin of their fangs, to the next round.

So, Evolution turned up with several members carrying a hangover – great we thought. we can take advantage of these burly men – hmmm, maybe not as the results reflect!

EVO got some steady 100’s and the PDQ´s got several scores over 60 which was great result for them!  Mike smith was named man of the match – how anyone can get as many doubles and high scores as he did with the hang over from beyond is fair do´s!  MOTM for us was Queen Deb who got the ‘one, one, one…’ of the night, having bribed Keith with a kettle, toaster, 60″ tv etc, he eventually succumbed QD’s friendly banter and D3 with screams and cheers all round.

Rachel was next up and nearly beat Phil ‘Wally’ Waller but his alcohol-fuelled dart fell into D2 giving them the required 7. A good evening and happy playing this format for the team game

Well done to all the winners, you will go through to the quarter finals and your games will most likely be played at a neutral venue, out of those that did not get a home game in this preliminary round i.e. Ale House, The Junction, Las Rosas and Evolution.  Commiserations to all the ladies’ teams- perhaps we should have our own mini competition???

El Capitan and Evolution have a postponed game to play on Tuesday 1st November and then it is back to league with game #5 next Thursday.  Happy Halloween everyone!