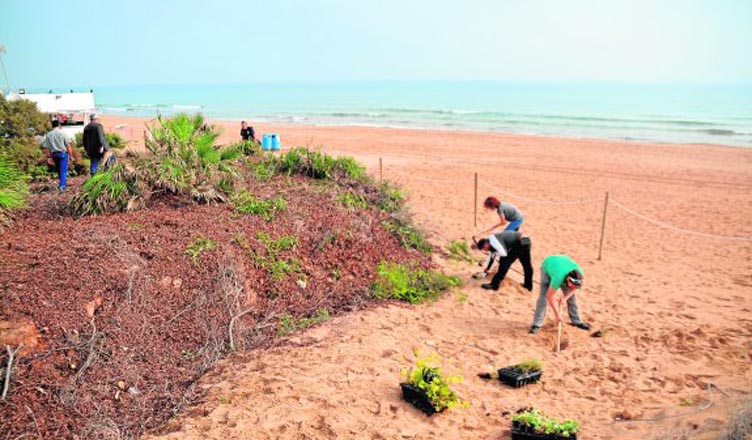 For the last week employees and volunteers from the Department of the Environment and the Association of Southeast Naturalists Spain (Anse) have been reintroducing flora that was once native in the area to the dunes of the Molino Natural Park as well as in a number of other areas along the main street of La Mata and along the Avenida de Soria.

The environmentalists were joined on Thursday by Councillor Fanny Serrano who said that “the aims are to restore the biodiversity of the municipality as well as restoring a number of landscapes that will act in the future as an attraction for both quality tourism and for environmental educational activities. ”

Whilst introducing many new shrubs another objective of the replanting is to eliminate invasive alien species that have displaced native flora in this area of dunes, one of the few along the coastal strip south of Valencia, such as acacias or la uña de gato, acacias or nail cat, which have caused the disappearance of much of the necessary ecosystem.

The reforestation has the support of the Ministry of Agriculture, Food and Environment through the Biodiversity Foundation and work will continue during the coming days.

The municipal biologist, Juan Antonio Pujol, said that one process that deserves special mention is the recovery of certain extinct species of local dune flora which will be reintroduced with the planting of  a number of varieties of seedlings.

He said that when completed it is planned to erect interpretive panels that will allow residents and tourists to know the names and the characteristics of the dune flora.