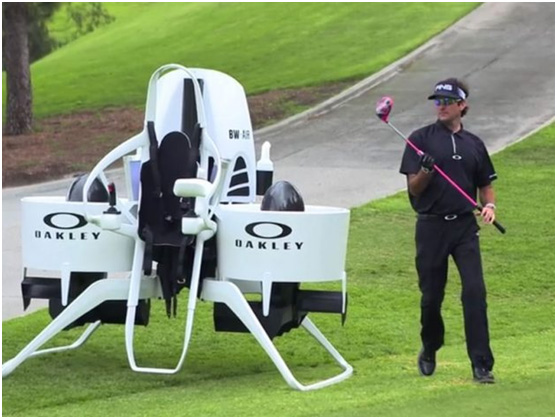 AFTER THE BUBBA HOVER, the Bubba Jet Pack.  Bubba Watson’s latest toy has a 210 hp engine and flies up to 3,000ft at 46mph.  The Oakley ‘BW-Air’ soars over trees and water hazards giving a birds-eye view of the course.  However, unlike the hover, there’s only room for one, so it’s not so good if your playing partner is in a buggy.   Pilot training and licence provided, and in case you’re interested, prices start at $200,000.  (Worth a look on Bubbajetpack.com)

“THEY BUILD the Olympic golf course on a swamp, and then say the mosquitos are a problem.  Where do mosquitos come from?” – Peter Alliss.

THE 1900 OLYMPIC GAMES in Paris allowed female athletes for the first time.  For the majority of the 22 ladies who entered sport was just a leisure pursuit.  American Margaret Abbott, who was studying art in Paris, entered, together with her mother, a 9-hole golf event they believed to be the Ladies Championship of Paris.   Margaret won with a score of 47 and was presented with a commemorative bowl, her mother came seventh.   The organisation was so shambolic the ladies didn’t even realise they had been competing in the Olympics!  Margaret was in fact the USA’s first Olympic Lady Champion.

IN THE 1904 OLYMPICS in St Louis, Missouri, the golf tournament attracted 75 amateurs from the USA and Canada.  Chandler Egan, aged 20, was the U.S. Amateur champion and hot favourite.  In the final, however, in horrendous conditions, he came up against 46-year-old superfit Canadian George Lyon, who battled through the wind and rain to win by 3&2, and afterwards walked round the celebration dinner table on his hands, while Egan went home exhausted.

GEORGE LYON crossed the Atlantic in 1908, keen to compete in the London Olympics.  A six-round tournament was scheduled at Royal St. George’s, Princes GC, and Royal Cinque Ports. However, the R & A were sniffy about golf in the Olympics, and after a dispute over player eligibility all the British entrants pulled out, leaving a disappointed Lyon the only competitor.  Offered the gold medal, he refused it.

BRAZIL IS SAID to be among the drug-taking capitals of the world.  If the Olympic athletes aren’t on banned substances when they arrive in Rio they probably will be by the time they leave.

AFTER FINISHING in 5th and 9th place at the Canadian Open, Brandt Snedeker and Matt Kuchar are in contention for a place on the U.S.  Ryder Cup team. Dustin Johnson’s 2nd place pretty well makes him a certainty.   With Majors counting double, those hoping to be among the chosen few at Hazeltine  in September will be looking for points at Baltusrol.

PAUL BROADHURST (50) winner of the Senior Scottish Open in 2015, now qualifies for next year’s Open Championship at Royal Birkdale after winning the Senior Open at Carnoustie with a bogey-free 68.  Miguel Angel Jimenez (52) is still looking for his first major.  He started Sunday four shots in the lead but two double bogeys put paid to his chances, and he finished joint-third with a 75.  Good, Miguel, but no cigar.

DUSTIN JOHNSON was asked to demonstrate his swing at a photo shoot in the ballroom at PGA National, Palm Beach.  Unfortunately his ball went straight through the practice net, out through the crack in the swing doors and smashed the exit sign at the far end of the entrance hall.  In the words of Mr. Punch: “That’s the way to do it!” 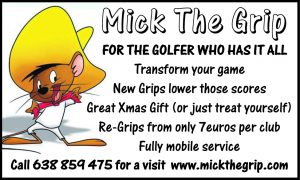