The Arenales del Sol hotel in Elche – closed in 1979 – is finally set to be demolished after years of concerns surrounding its safety, under both health and safety fears.

Removal of asbestos continues ahead of demolition in October with specialist staff wearing hermetic suits – working shifts not exceeding 30 minutes, due to health procedures.

Two-tonnes of asbestos lined concrete structures have been removed entering into October on the beachfront eyesore hotel. 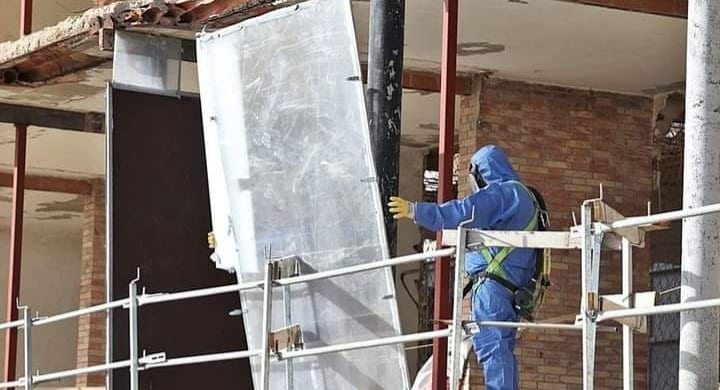 Fencing stretching 130 metres x 2 metres high was erected in recent years, in a bid to keep out of the no entry prohibited site.

During removal of asbestos, Activa Desamiadados employees wrap the sheets before placing them in a refrigerated chamber, maintaining no particles are released to the public.

A mechanism is activated to wet concrete pillars with special liquids, with toxic material bagged for transfer to a specialised centre managing asbestos.

The asbestos will be disposed of in a specialised landfill outside the province, due to Spain having few facilities for the disposal of asbestos.

The dismantling of one of the two wings of the hotel is completed.

The Arenales del Sol hotel, built in the sixties, without knowledge of the danger asbestos posed to workers.

Asbestos fibres’ inhalation can be fatal, causing lung cancer amongst others.

Asbestos was extensively used within the construction industry within Europe during the 1960s-80s.

My father George Atkinson passed away in November 1982 in England, due to lung cancer caused by asbestos aged 60, while employed by British Aerospace (BAe).