Both teams started off this preferente division clash with 6 points from 3 matches, but it was the hosts who deservedly extended their points tally.  Last season, Santa Pola very nearly made the drop into regional football, but fortunately for them, a final day victory kept their preferente status intact.

Fresh from a stoppage time victory against CFI Alicante, spirits were high in the Thader camp. 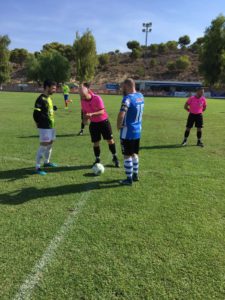 It took both teams a while to get into the groove, as the game took on a niggly feel, where players were cautioned early on, including Pascual.  A cross by Jony on 9 mins was met by Quino, but alas he shot just wide of the near post.  On the half hour mark, the same combination gave Quino a clear run at goal, but a dubious offside decision cut short what might have been.

Rosquin went close shortly afterwards, but Thader didn´t have to wait long before they were duly rewarded for all their endeavours.  Ruben floated a delightful free kick to the far post, which was headed firmly into the back of the net by Fran.  With half time approaching, a long-pumped ball was safely gathered by Thader keeper Chema.

Immediately, he was flattened by a late reckless challenge from Guillermo, which could well have been a red and not yellow card shown to the culprit.

With barely a minute played in the new half, the visitors were down to 10 men.  Not having heeded his lucky let off, Guillermo once again took a lunge off the ball at an opponent.  This time his foul on Lloyd earned him another caution, resulting in a justified walk of shame.

Down to 10 men, Santa Pola surprisingly upped their game, forcing Chema to make an excellent double save.  Raul Mora decided it was time to freshen up his team on 62 mins, making a triple substitution in the form of Calderon, Oscar & Javi.  It produced immediate results, as Calderon was causing havoc for the Santa Pola defence at will.  He put the ball in the net within 2 mins of coming on, which was adjudged offside, then forced two fine saves.

The rebound from the second save fell invitingly for midfielder Rafa, who was able to pick his spot from the edge of the box, doubling his sides lead on 79 mins.  Only 3 mins later, Calderon was brought down in the box, allowing Ruben to send the keeper the wrong way to make it 3-0.

The rout was complete on 88 mins, when Javi´s low cross from the right, found recently introduced Alberto in oceans of space, executing the simplest of tap ins for goal number 4.

Next weekend, Thader make the short trip to Almoradi for another Preferente division encounter.  For further details of this, and much more, visit CD Thader facebook page.