In Part 2 of a Leader Exclusive interview Andrew Atkinson talks to Orihuela based Casey Shaddock about her parents with dad Bill forming Lake Jackson Improvement Co. Ltd – and the First National Bank of Lake Jackson in Texas.

After opening the first Shaddock’s Rainbow Supermarket, dad formed the Lake Jackson Improvement Co., Inc. which became the parent company of his property and the rest of the block, apart from where the bank sat.

Brockman’s was located on this site, as well as a variety store. I think it was Wacker’s.

The entire project cost close to $650,000 – a tremendous amount of money back then!

They flew to Dallas to start the ball rolling and in September 1963, B. E. Shaddock and H.L. ‘Buddy’ Baker opened the doors of the First National Bank of Lake Jackson.

My father also served on the Board of Directors at the Angleton Bank of Commerce.

In 1961, he travelled to Ft Bliss, with a select group of men from Lake Jackson to witness the firing of one of the first guided missiles.

James Nabors from The Brazosport Facts and several other prominent businessmen were in the group. 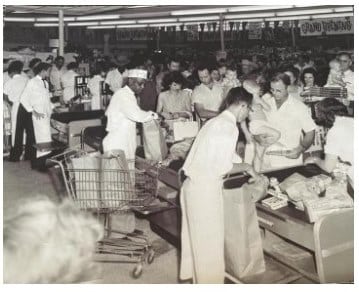 In 1963, my father tried to retire and thus, sold the grocery stores to the Stanley Brothers from Bay City.

My mother always told him, you wanted your younger daughter, Casey, so you need to retire to help rear her.

He served in WWII when my brother and sister appeared, my sister being 18 years older than I. Retirement did not last long, however!

In 1964, dad went into partnership with Roland Travis, opening Roland’s restaurants all around the state.

In 1968, he and three other men opened the Beacon Theatre in Angleton.