Spanish Nationals, Expat Residents, holidaymakers, politicians and action groups, turned out in their thousands on Saturday as they formed a human chain to embrace the Mar Menor in protest against the desperate situation and the mismanagement of Europe’s largest saltwater lagoon, appealing once again to political leaders to put an end to this ecological disaster.

The demonstration was organised by the ILP Mar Menor Platform, in conjunction with the Ecologists in Action, taking place along much of the 73 kilometres coastline that makes up the perimeter of the lagoon.

The symbolic action was also joined by Goddess Maat, a sailboat belonging to Ecologists in Action, which has ended its summer campaign in the Mar Menor, as a sign of protest against the “appalling” management of the salty lagoon.

It also included a minute’s silence as a sign of mourning, followed by a hymn composed by the Cartagena band Nunakat, entitled ‘Sol y Sal’, which they dedicated to the lagoon. They were joined in song by many local artistes following which demonstrators chanted, in unison, ‘Long live the Mar Menor’.

Spokesperson Teresa Cutillas, a member of the ILP Mar Menor platform said, “we have been waiting for solutions for many years and the problem is only being patched up, with a series of decisions that, until now, have not solved anything.”

“The situation of the lagoon is desperate and the residents of the area, neighbours and lovers of the Mar Menor do not want to wait another second.”

Ecologists in Action has also been denouncing the “terrible” situation that the Mar Menor is going through for many years, and this week it has once again raised the alarm, having seen in recent days “thousands of fish and crustaceans dying on the shores of what was once the jewel of the crown of the regional environment.

“The main cause of this natural disaster is the constant loading of the lagoon with chemicals, animal waste, sewage, from the land, a process that it has suffered for several years due to the entry of fertilizers of agro-industrial origin,” she pointed out. “There is currently a lot of anger amongst the people.” 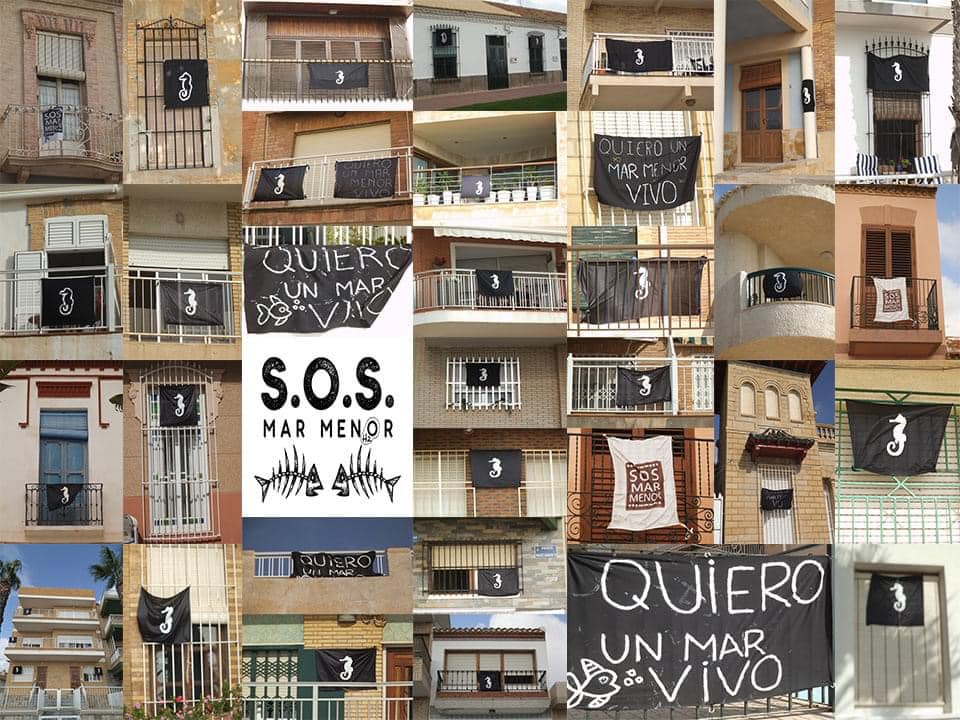 However, the Mar Menor continues in its agonizing state and, after ten days of political squabbling over competencies, national and regional political forces finally seem to want to align themselves in favour of its recovery.

Murcia’s President, Fernando López Miras, initially claimed to have his “hands tied”, but after five tons of dead fish washed up onto the shores he announced that a meeting with the Minister of Ecological Transition, Teresa Ribera, has since made it possible for an agreement to carry out joint measures to save the lagoon, including a ban on the use of inorganic nitrogen fertilizers in the so-called ‘zone 1’ of the Mar Menor, which affects land in the municipalities of San Pedro del Pinatar, San Javier, Los Alcázares and La Unión.

He said that, although they recognised that there are “discrepancies” in the order of priorities, they agreed that there is much more agreement in the overall vision that will see the end of the discharge of chemicals into the Mar Menor.