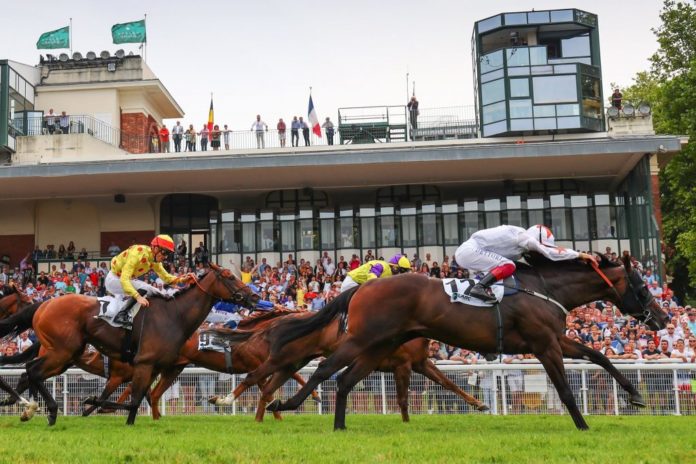 Frankie Dettori and Palace Pier landed back-to-back wins in the Group One Prix Jacques le Marois at Deauville on August 15.

“I love the horse. He’s the best miler I’ve rode. He’s beautiful and he’s got everything, pace, a turn of foot and goes on any ground,” said Dettori.

“We were rushing to get him here. He’s missed a bunch of work and we got him here on 80% – he’s just so good and got away with it,” said Dettori.

“Palace Pier is so good and just keeps on doing it. Apart from losing a shoe and getting a bad start in the QEII last year, he’s done nothing wrong. He’s a joy to ride and a joy to be around,” added Dettori.

“I thought it was a very clean race. They went a pretty sensible pace and it was not a race to be sitting out the back,” said co-trainer John Gosden.

“We were second-last and they quickened and quickened. To that extent it was a bit of a test of speed.

“He’s done it well. I’ve made no secret of the fact he was ill with a blood disorder and missed the Sussex.

“I’ve come here on the absolute minimum of work. He’s probably come here at 80%. As Frankie said, his class got him through – but he’s having a pretty strong blow.

“I was 10 days short for this race – but they weren’t going to move the Jacques le Marois!,” quipped Gosden.

Palace Pier has been cut to 7-4 from 2-1 for Ascot’s Queen Elizabeth II Stakes.

Gosden added: “He’s a gorgeous horse and a lovely horse to be around. He’s got this amazing cruising speed and acceleration.

“I wouldn’t be frightened of stepping him up to a mile and a quarter. I think we’ll wait for Champions Day.

“When you run a horse like this, don’t come back too quick, so we’ll wait for Champions Day and possibly run over a mile or even a mile and a quarter.”