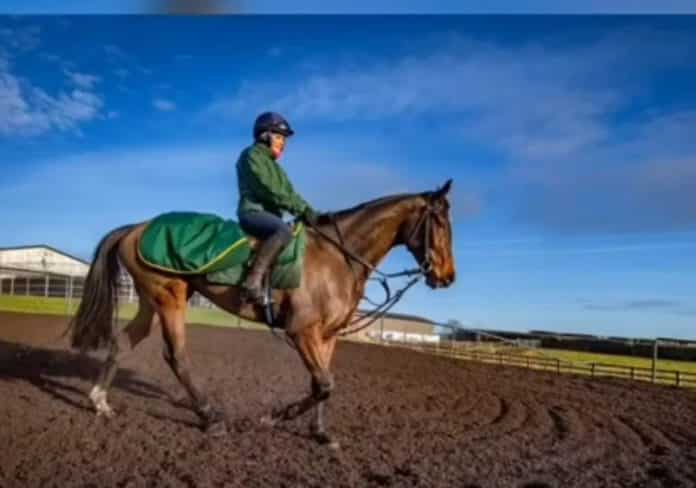 Lady Buttons is back in training ahead of the winter National Hunt campaign at Phil Kirby’s Green Oaks racing stables in Yorkshire.

Owner Jayne and husband breeder Keith Sivills decided to retire the 11-year-old in September and sent her to Coolmore stud, Castlehyde, Ireland in February to be covered by Walk In The Park.

After undergoing blood tests it was discovered Lady Buttons had underdeveloped ovaries, and subsequently returned to Green Oaks Farm in retirement.

“Wetherby in November is probably where we’d go – if everything goes well.

“Keith and I are well aware that she can’t go on forever, but if she’s still got the ability to do it, why not let her do it?,” reasoned Jayne.

Lady Buttons – described by Phil Kirby as a horse of a lifetime – first win was at Wetherby in 2013, and went on to race at the Aintree Grand National meeting in the Group Mares Listed race and Listed company at Cheltenham.

“If Phil says she’s not the horse that she was, that’ll be it. Even if she gets to her first race and isn’t up to the standard.

“She won’t be pushed into doing something she doesn’t want to do – she’s too precious to do that,” said Jayne Sivills.

The post Lady Buttons back in training appeared first on Horse Racing News and Tips.