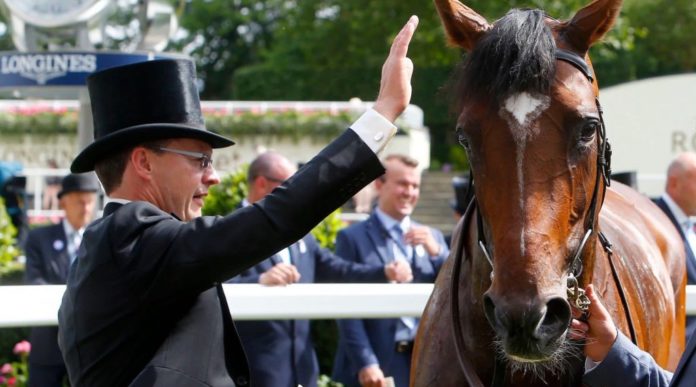 Aidan O’Brien trained duo Love and Armoury are pencilled in to go to post in the Prince of Wales’s Stakes at Royal Ascot.

Love could return to action following her third consecutive win in the 2020 Yorkshire Oaks on a CV that includes winning the 2020 1,000 Guineas.

Ballydoyle based O’Brien revealed Love could head for the Group 1 Alwasmiyah Pretty Polly Stakes at the Curragh on June 27 if, not appearing at Royal Ascot.

On Love’s tilt in the £700,000 Prince of Wales’s along with stablemate Armoury, O’Brien said: “At the minute we’re looking at running Love and Armory. That could change but that’s how it’s looking at the moment.

“We were delighted with what Armory did at Chester and everything has gone well with him since. All has gone smoothly with Love so far, too.”

“We always thought the world of him and we were delighted with him,” said O’Brien.

“I think the lads are looking at races like the Eclipse, the Juddmonte International and the Irish Champion Stakes. He’ll have to get back into full work again before we see where he goes,” added O’Brien.

“He won’t be going to Ascot,” rued owner Jim Wigan.

Bay Bridge was set to go to post as favourite in the Group 2 King Edward after landing Newbury’s London Gold Cup.

“We don’t yet know when he’ll be running again – plans are not finalised. He looks like a nice horse and it hopefully shouldn’t be too long before he’s back,” said Wigan.

“It’s difficult to assess her chance, due to the lack of travelling at the moment there are very few formlines between the French and British horses. “She certainly seems to be the best sprinter in France, but how she compares with the British and Irish horses, I don’t know.

“She obviously hasn’t done anything wrong yet and I don’t think the ground we’re likely to get at Ascot will be a problem, given that her last win at Chantilly came on quite quick ground,” said Wigan.

Strawbridge-owned Indigo Girl, is an entry in the Coronation Stakes and the Prix de Diane Longines.

“I’m not sure whether she’ll run here or in France but right now I would say Ascot is doubtful,” added Wigan.

The post O’Brien duo Love and Armoury to go to post in Prince of Wales’s Stakes at Royal Ascot? appeared first on Horse Racing News and Tips.