Memorabilia of late snooker star Willie Thorne, formerly based in Villamartin, is to be sold by his wife Jill Saxby.

Thorne passed away on June 17, 2020 of sepsis shock in Torrevieja hospital, aged 66.

Leicester born Thorne underwent chemotherapy treatment for leukaemia, at Torrevieja hospital after being diagnosed in March 2020.

“June 17, will be the first anniversary of his death,” said Jill.

Speaking to The Leader about the 2000 World Snooker Seniors trophy, Jill said: “The beautiful gold on solid silver personal trophy is now for auction to help his charity of choice, 20-20 Voice Cancer, of which Willie was a proud Patron.”

Jill, who took over as Patron of 20-20 Voice Cancer charity, following his passing, said: “I now have the honour of continuing his support of head, neck and throat cancer early detection and treatment.”

Following Thorne’s death a Memorial service was held in Orihuela Costa Spain on June 24, 2020, attended by his three children, daughter Tahli and twin sons Tristan and Kieran, at the Cristo Resucitado Church in La Zenia. 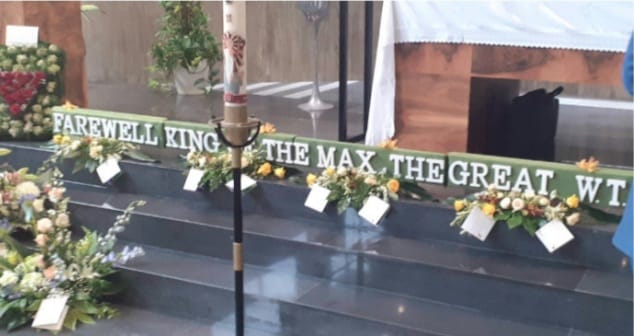 Flowers adorned the altar and beside his coffin, was the message ‘Farewell King of the Max the great WT’.

Flowers were also sent from the WPBSA, represented by BBC TV commentator, John Virgo, Thorne’s friend of 50 years, who read a Eulogy.

“You will always be remembered Willie,” said Virgo.

Thorne was cremated at Torrevieja crematorium and his ashes returned to the UK.

On selling Willie Thorne’s memorabilia Jill added: “I welcome you to contact me with your bid for a memory of The Great W.T. Snooker history” jillthorne26@gmail.com