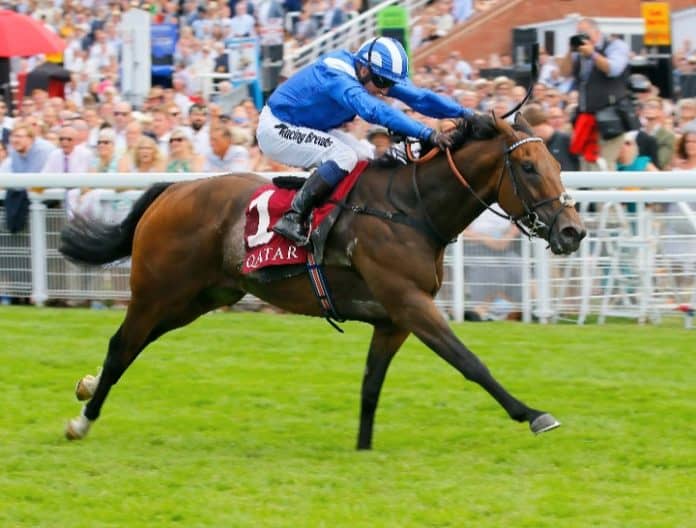 Liberty Beach landed the Group 2 five furlongs Temple Stakes under Jason Hart, that saw odds of 10-1 nibbled at to 8-1 for Royal Ascot sprint, having ran third to Battaash in 2020.

“I’m delighted. She had to be tough at the end but she dug deep and nothing passed her after the line,” said Quinn.

“She’s very quick and has won three times first time out, the other filly Keep Busy has never won first time out. The two of them are in the King’s Stand and they’ll go there,” said Quinn.

“It’s nice to get them out and get a run into them. Anyone can only do so much at home, so to have a run into both of these is vital really,” added Quinn.

Champion sprinter Battaash goes to post as favourite for the King’s Stand Stakes.

Hills was in a positive mood of Battaash defending his crown in the King’s Stand Stakes after the seven-year-old, sustained a small fracture in the winter, leading to a long lay, putting Ascot in doubt.

“After returning he’s settled back into his routine of what he has done for the last few years. I’m really pleased with him,” said Hills.

“I’m really pleased with where we are with him actually. At the moment there’s no reason why he wouldn’t make it.

“His weight is pretty good and he’s showing all the same levels of enthusiasm that he always has done, so I’m happy,” added Hills.

Quinn trained Frankenstella, daughter of Frankel, will be aimed at the Ascot Stakes: “She’s been a slow-burner but we’ve always thought she has plenty of ability and she liked the ease in the ground.

“She’s run well this season and was unlucky to get stopped at York last time,” said Quinn.

Roger Varian trained Raadobarg is heading for Royal Ascot on the back of winning the Silver Bowl it being the trainer’s 1,000th career winner.

Emily Scott, racing manager for the winning owners, said: “Roger was hoping he’d go well to get in the Britannia at Royal Ascot, where he should get every yard of the stiff mile.

“He’s relished the conditions and hopefully we can have more success with him. He’s clearly got a lot of ability and we’re just scratching the surface.”