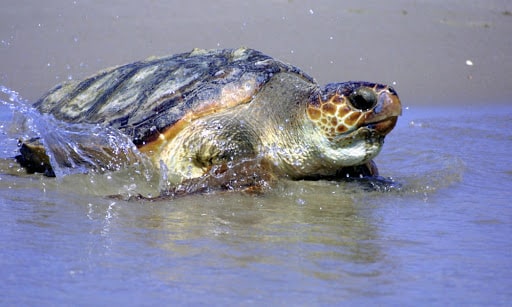 In recent years, loggerhead turtles have chosen the beaches of the Valencian Community up to 8 times to lay their eggs, one of them, in the summer of 2015, in Torrevieja. But the attempts have been many more. For example, only in the Maritime District of Torrevieja that ranges from the mouth of the Segura river to El Mojón (municipalities of Guardamar del Segura, Torrevieja, Orihuela and Pilar de la Horadada), the attempts have been a total of 6, having reached to locate, in the summer of 2018, a new born turtle. Two of these attempts occurred last year 2020 on the Orihuela coast, although neither of them were successful.

From this month of June begins the peak period in which loggerhead turtles can eventually go out to the beaches at night to spawn. This period ends throughout the month of October, where occasionally it is possible to find baby turtles from possible nests that had not been located during the previous months. Torrevieja City Council has been carrying out specific information campaigns every year for all beach users (citizens in general, walkers, beach bars), for services such as beach cleaning services that operate at night and for Local Police and Guardia Civil. All this with the intention that, given the possibility of observing a turtle laying eggs on the beach, or its trace left in the sand when it returns to the sea, it is known to act correctly so that everything goes well. Antonio Vidal, Councillor for the Environment and Beaches, has indicated that this year, in addition, they will be installed in the main accesses to the beaches, some posters alluding to the general protocol to follow, which begins by calling 112, and in the that includes a series of recommendations to avoid disturbing the animal while it spawns or attempts to do so, being essential not to approach, not make noise or dazzle the animal and avoid photographing it with flash. By calling 112, a team of professionals is set up to attend the event, and in which the Ministry of the Environment, the University of Valencia and the Oceanogràfic of Valencia participate, as well as Torrevieja Council in its territorial area. Quick action is essential for the location of the nests and the protection of the eggs, in highly touristy beaches that the next day will be full of users. It also allows the collection of an important series of biological data on sea turtles (such as their genetic characterization or their tagging with satellite emitters) that ultimately contribute to a better understanding of the process of recolonisation and consolidation of new breeding beaches that is taking place during the last years on the shores of the Spanish Mediterranean. Everyone’s involvement and knowing how to act correctly can help consolidate Spanish beaches as a laying and breeding area for sea turtles. The post Turtle Awareness Campaign Launched first appeared on This Is Torrevieja.