The Alicante Brigada Red Natura 2000 is one of six Government sponsored organisations in the Community of Valencia that is part of the efforts to conserve local biodiversity, especially linked to coastal areas adjacent to beaches that have been awarded Blue Flag status.

They are dependent on the General Directorate of Natural Environment of the Department of Agriculture, Rural Development, Climate Emergency and Ecological Transition, and with the cooperation and support of the Torrevieja City Council and the authorisation of the Provincial Coastal Service in Alicante, they have begun to erect fencing around and area in Cabo Cervera that will both restrict and better define the pedestrian routes within the area. 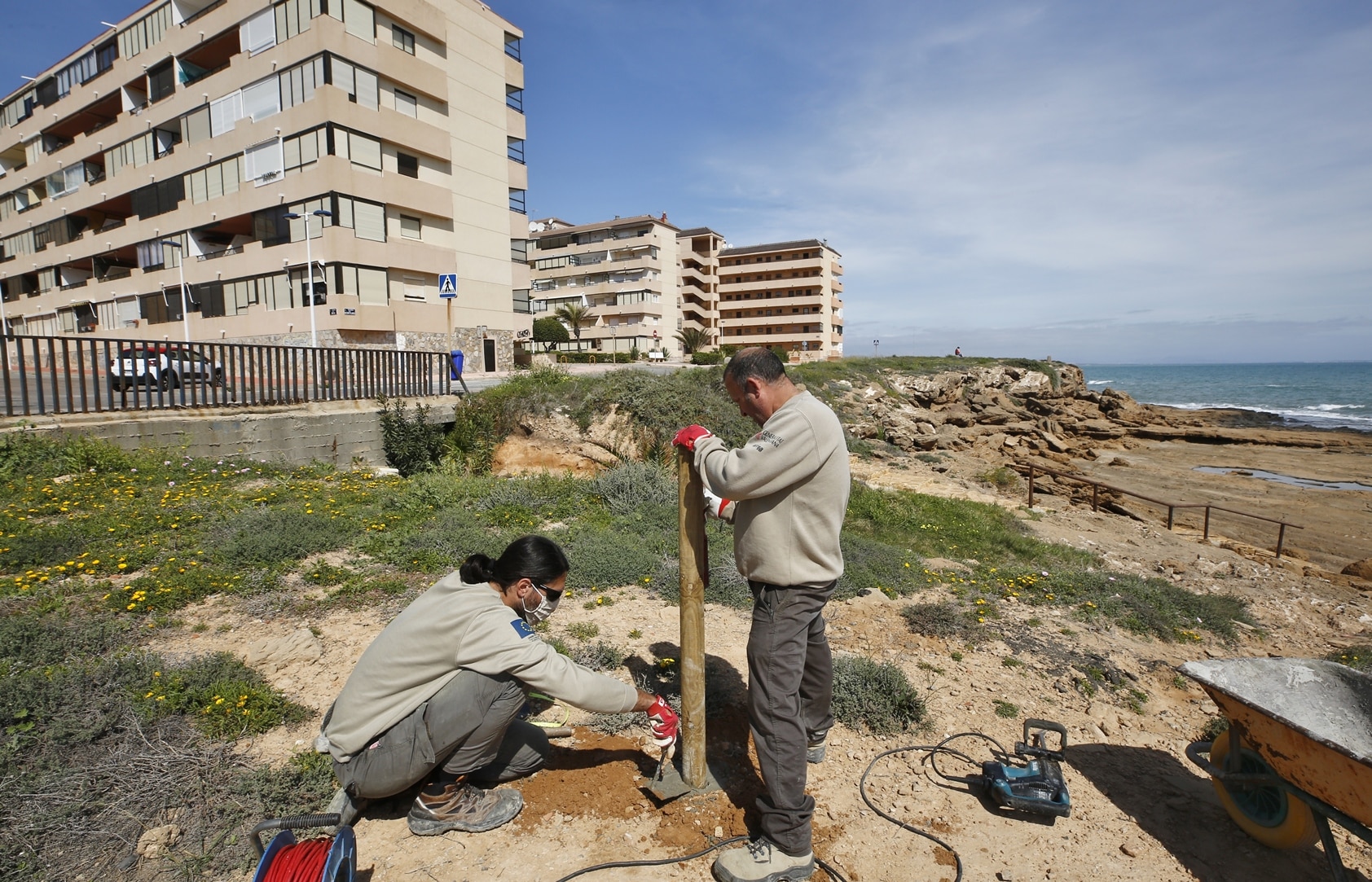 All this in order to protect the vegetation and flora of interest, especially the vulnerable species of cat’s head jarilla (Helianthemum caput-felis). The action will respect the established pathways to the bathing areas located in this rocky coastal sector.

As is also the case in Punta Prima and Cala Mosca where CLARO and Cambiemos are caught up in a clash with both developers and the Orihuela Council, they too are attempting to protect many of the same species of vulnerable vegetation and flora, as part of the national efforts to conserve local biodiversity. 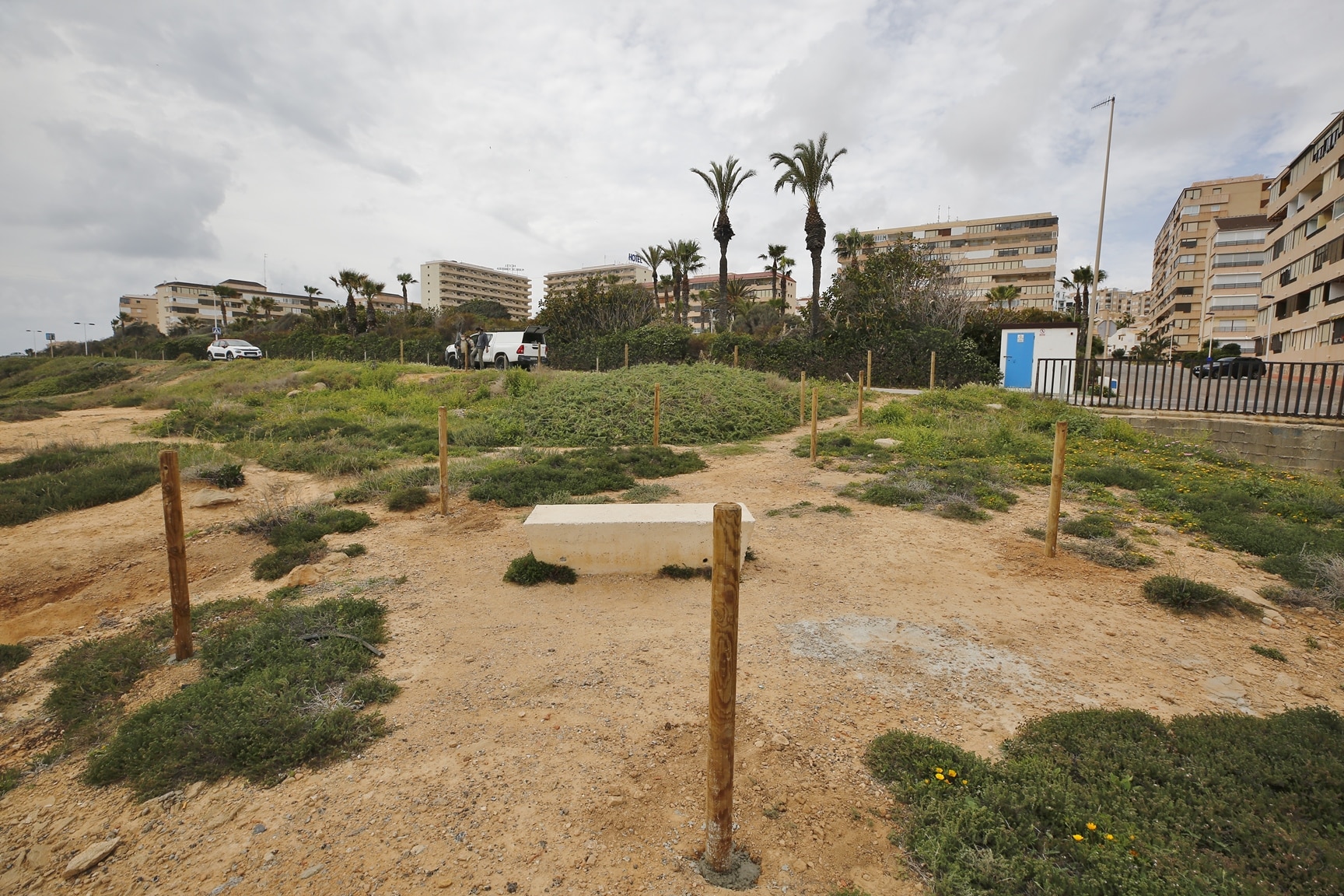 The micro-reserve in Cabo Cervera, a privileged enclave by the sea, is one of the few areas where the vulnerable cat’s head jarilla (Helianthemum caput-felis) still grows, a plant species that has found a refuge on the southern coast of the province, where one of its largest populations that remain.

However, the main danger to the vulnerable vegetation that grows in the micro-reserve are the bathers who access this rocky coastal area in their thousands without looking where they step, destroying the plants that grow underfoot and that make it such a unique place.

Therefore, the action that is being carried out by the Consell in conjunction with the City Council, and with the authorisation of the Provincial Coastal Service in Alicante, is the delimitation of a series of pedestrian routes within the area that will prevent the passage of people directly through the places where this most vulnerable vegetation grows.

Wooden fence posts with ropes are being placed that delimit the trails, something that this area of the Torrevieja coast has lacked. The route still allows access to the bathing areas located in this rocky coastal sector but in future it will be through the established entrances, thereby avoiding cat’s head jarilla, which is included in the Spanish Catalogue of Threatened Species and in the Valencian Catalogue of Threatened Flora Species.

The Torrevieja Council has said that the action is part of “the efforts to conserve local biodiversity, especially linked to coastal areas adjacent to beaches awarded with the Blue Flag.”

In addition, invasive alien species will also be removed, and revegetation work will be carried out with native species typical of the coast, reinforcing the populations of the cat’s head jarilla. Likewise, it is also intended to help reduce soil erosion and guarantee the safety of pedestrians who walk through the area.

The action is very similar to that carried out last year by the Generalitat, in collaboration with the Orihuela City Council, in the La Glea micro-reserve of flora, where there is also a large population of jack-headed jars.

It is a unique species in the world that is only found in the western Mediterranean. Their situation is so critical that scientists are counting each specimen or set of specimens in detail. The Torrevieja Department of the Environment reintroduced in 2018, after protecting this space, 203 specimens of Helianthemum caput-felis in the micro-reserve of flora of Cabo Cervera.