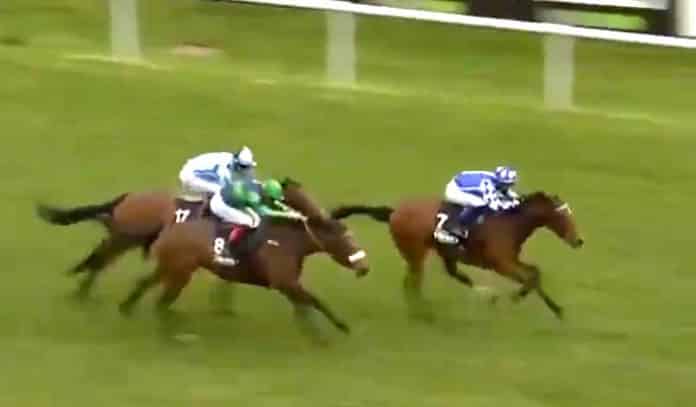 Teenager Benoit de la Sayette rode Haqeeqy to victory in the £100,000 Lincoln Handicap at Doncaster on Saturday when up on the John and Thady Gosden trained 9-2 favourite.

“It’s a dream come true, a fairytale. Just to ride in the Lincoln on my first turf ride was unbelievable.

“I have to thank the boss for putting me on such a wonderful opportunity,” said de la Sayette.

“What I’ve learned and the boss has taught me is that the cooler you are on the horse, the better they will run.

“When the boss told me I was riding him my face lit up, I couldn’t believe it. I can’t thank everyone enough.

“The main goal was to get him as relaxed as possible. I tried to put him beyond someone so he could switch off, that was the main thing to make sure he would last to the end and didn’t pull too hard.

“Luckily enough a gap opened up which I wasn’t expecting, as I thought I was going to be trapped the whole way.

“The turn of foot he showed was absolutely thrilling. To have a feeling like that, you can’t get better,” added 18 year-old de la Sayette.

In what was a memorable weekend Gosden trained Mishriff won the Longines Dubai Sheema Classic – on the back of a Saudi Cup victory at Riyadh in February – ahead of Chrono Genesis in a thrilling finish to provide a first Group 1 victory for jockey David Egan.

“He’s a champion – the horse who’s going to make my career, hopefully. He brought me to that next level by winning the Saudi Cup – the icing on the cake,” said Egan.

“A lot of people were questioning why Mr Gosden and Prince Faisal were running him on the turf over a mile and a half.

“Some said it was the wrong decision not going for the World Cup, which he might have been favourite for. This was the right decision,” added Egan.

Global Giant (8-15), Good Ball (2-1) and Jonbon (1-2) were winning selections by fromthehorsesmouth.info with each-way tips Acquitted (10-1) and Forth Of Firth (5-1) placed at Doncaster and Kelso, respectively.