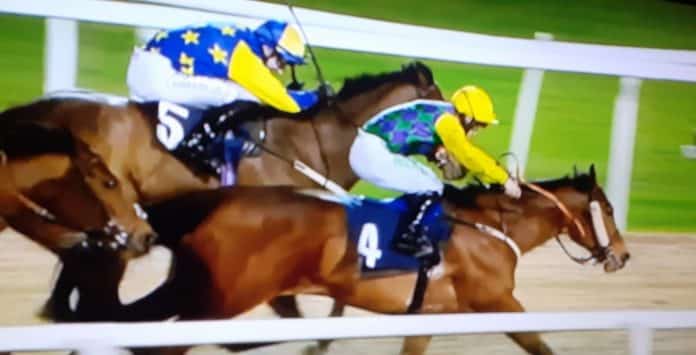 “I knew he was fit, but thought he would be a bit rusty, but he held on to win,” Eric told me on Saturday morning, via video link from Edges Farm stables in Longton, Preston.

“Harry’s Ridge has been behind, having not run as a two-year-old, and it was frustrating at first – but he’s going in the right way now,” said Eric.

“I still haven’t met Harry’s Ridge new owner Laurence Carlisle who lives in Lytham, due to the coronavirus situation. It will cheer him up winning,” said Eric.

“Hopefully I will get to meet Laurence soon. We have no immediate plans for the next race, but he will go on grass,” added Eric.

Jockey Jason Hart said: “Eric has supported me throughout my career and it’s nice to have a landmark 500th UK career win on Harry’s Ridge.”

Hart, who began his career aged 16 with trainer Mark Johnson, lead 3 furlongs out, headed entering final furlong, ran on, to lead again towards the finish, to snatch a neck verdict over Sambucca Spirit, with Klopp, third.

Main Captions: Harry’s Ridge (4) gets up to beat Sambucca Spirit a neck in Betway Handicap at Newcastle.