lmperial Pools vacated the position of league sponsors after 3 successful seasons, Paul Durrant ( league chairman ) aware that Debbie Mackleston, Euronics electrical store owner, was prepared to take over the available position. Debbie, already familiar with the league as a player, readily agreed to headline Thursday darts, an association that was to last 7 years.

Leader newspaper editor, Kevin Reardon contacted me prior to the AGM with a proposal for a Saturday pm slot on Exite radio.

l readily agreed and for the next couple of years spoke weekly on Euronics and pro darts, plus my questionable input on footballs Premier League. l gave out local darts results and individual performances and of course my predictions on the footy results. Very enjoyable, Kevin and l were the Saint and Greavesie of local radio. 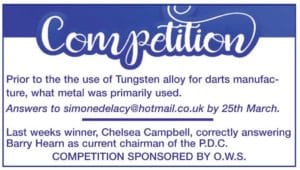 ln February of this season, Debbie of Euronics, celebrated the 3rd anniversary of the opening of her Blue Lagoon showroom, amid fanfare and a cake to mark the occasion. The nearest l got to the cake was via the photograph, soon to be husband Dave Wright claiming his share.

At the league halfway stage, Rendezvous Bulls topped the table, Gogartys second, both unbeaten, the La Zenia side drawing two. By the end of the season positions had reversed, Gogartys champions, ironically achieving top spot in the last game against the Bulls.

James Browns’ Gogartys just needed a draw to take the title as they had a superior leg advantage, but were 6-5 down, one to play. The last single Jack Todd, versus the Bulls Martin Hastings. Todd held his nerve going out on 52 for the draw and title.

A quirk of the result, was that the Bulls actually finished unbeaten coming 2nd, however, Gogartys won more matches. A well deserved victory and exciting finale.

This seasons A.G.M. was held at the now defunct Porterhouse bar, Rioja Centre, Euronics continuing their financial support and generous discounts to Thursday league members. Brett Badlove introduced his Que Pasa bar venue to the league, the team included an excellent dart shooter in John Walker. Champions Gogartys were now the Gophers, just a shadow of their former selves, several players moving on.

A previous singles winner, the popular Sam Salt, now a federation player, still turned out for the Hub, but playing football, in the annual charity tournament at Playa Flamenca. Not only is Sam a pretty decent dart player, but he’s not bad at footy either winning the ” Player of the Tounament ” award.

Simon Williams, Tony Fordy and Sam also raised much needed funds for the MacMillan Support Group by abstaining from alcohol for one month in what was termed OC-SOBER. How those 3 managed is anyones guess, but manage they did, exceeding their original target.

The Hub Meerkats were top after 6 with a 100% record, ” Kat” Alex Nikolov banging in a nice 141 game shot. Fast forward to the 20th match, team mate Lee Maiden recording a fine 14 dart leg, that included consecutive 180’s, opponent Leah Chesworth, not a bad player herself, acknowledging his effort. ln the 26th and final match of the season, Pint Depot Queens had their last chance to earn a point, visiting the Honeys of Hattons.

Alas, the Queens finished pointless, after taking 5 of the 6 legs required for a point . The 141 out that had stood for 20+ weeks was finally beaten by a John Eyres 170 playing Busters. Meerkats dropped just 2 points in their campaign, drawing 2, Hattons Hunks and Busters. 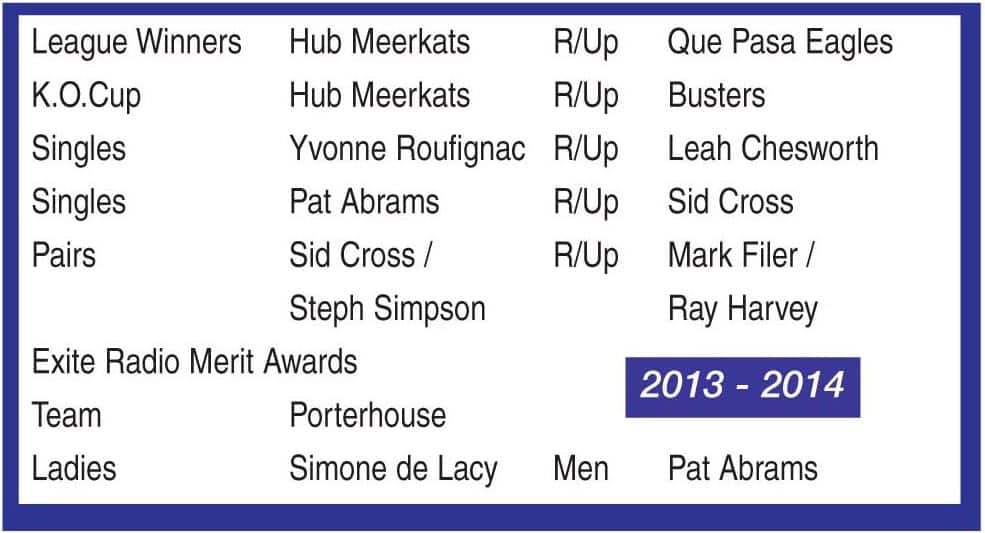 The Northern lrishman has been around a long time, joining the pro circuit in 2007, but is largely unknown to t.v. audiences. He was however the 1st player to hit a 9 dart, double start, finish, in a 2010 World Grand Prix semi final win over James Wade, losing to Phil Taylor in the final.

World no. 1 Gerwyn Price got back to winning ways in this 6th Players Championship of 2021. The 8-5 final scoreline against U.K.Open runner up Luke Humphries, a fair reflection of the World Champs’ dominance of day 2. His 102.2 average was his 6th ton+ of the day, the 9 x 180’s in the final an added bonus.

lt was pretty tight semi however for the Welshman, in his victory over a rejuvenated Brendan Dolan, having to use all 13 legs to overcome the stubborn lrishman 7-6. Price returned a 106.8 ave. Dolan 104.8. Humphries’ semi a little less lively in the scoring department, but the same result, in his defeat of Jamie Hughes.

Out in the last 64 (winning just 1 round), Price, losing 6-2 to Chas Barstow, Gurney, Anderson, Cross, King, Whitlock, Aspinall and Suljovic, to name a few. After reasonable success on Day 1, Lisa Ashton fell a t the 1st hurdle, 6-0, against Dutch export Vincent van der Voort. What about Peter Wright you may ask, also a 1st round victim.

As we all know ,Price is no slouch, his contribution, 2×12’s and a 14, but darts can be a fine line between success and failure, Wright taking every given opportunity. The World no.3 was in fine fettle losing only 4 legs in his first 3 matches.

Brendan Dolan reached yet another semi, losing out to Price 7-2, after dumping Cross and de Sousa earlier   Micky Mansell hit a 9 dart consolation leg in his defeat to Jamie Hughes 6-5.

Raymond van Barneveld was unexpectedly taken ill during day 4, and was treated by paramedics at the Marshall Arena venue. lt was deemed unnecessary for hospital treatment, but was taken to his hotel for further observation. Our best wishes are extended to him for a speedy recovery.