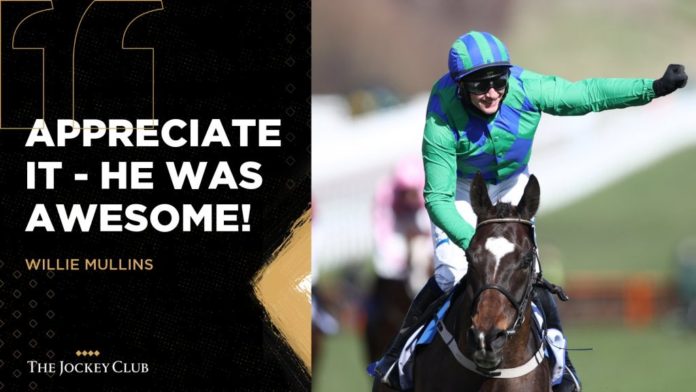 Appreciate It trained by Willie Mullins – tipped by fromthehorsesmouth.info – won the Sky Bet Supreme Novices’ Hurdle on day one of the Cheltenham Festival ridden by Paul Townend, gaining a 24 lengths victory ahead of Ballyadam (6-1) with For Pleasure (40-1) third.

Appreciate It (8-11) landed the opening race at the four day meeting saddled by Mullins, the most successful trainer in the meeting’s history, by chalking up a 73rd festival career success.

“That was more like it from this lad. Proper performance, wasn’t it?,” said jockey Townend.

Mullins said: “Appreciate It was awesome. Paul was exuding confidence the whole way down the hill. It was textbook stuff from Paul and the horse.

“Appreciate It was confident all the way round. It astounded me.”

“I’m delighted to be on a horse like Shiskin. Amazing. After that he can be anything. Shiskin was in fantastic form today and he would have taken some beating.

“It was a fast, hard race, and no prisoners were taken,” added De Boinville.

“I can’t believe it. But it’s not the same without the people being here at Cheltenham,” said Henderson.

The post Appreciate It and Shiskin combined 36 lengths Cheltenham rout as duo bolt up! appeared first on Horse Racing News and Tips.