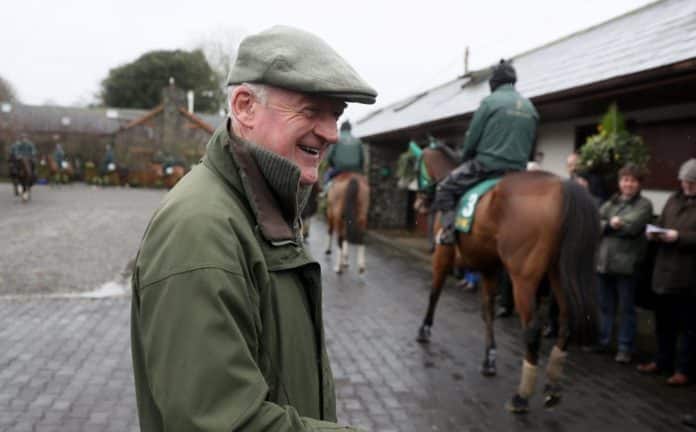 Willie Mullins’ entourage rolls out on day one of the 2021 behind closed doors Cheltenham Festival on Tuesday March 16 with Appreciate It (1.20) tipped by fromthehorsesmouth.info to land the Sky Bet G1 Supreme Novices Hurdle opening race over 2m.

Seven-year-old Appreciate It, ridden by Paul Townend, has won three from three over hurdles in impressive style, including a Grade 1 at Leopardstown in February.

The threat is Harry Fry trained Metier, ridden by Sean Bowen, useful on the Flat in Ireland with a promising hurdles G1 bow on CV.

One For The Team (2.30) is tipped each-way by fromthehorsesmouth.info in the Ultima G3 Handicap Chase over 3m 1f.

Ridden by Tom Scudamore the seven-year-old trained by Nick Williams ran in G1 at Kempton last time out. The threat is smart chaser Aye Right (ew) ridden by Richard Johnson.

Concertista (3.40) trained by Willie Mullins and ridden by Paul Townend is tipped to win the Grade 1 Mares Hurdle over 2m 3f. Winner at the Festival in 2020 and won G3 at Leopardstown in December. The threat is Dame De Compagnie (ew), the Nicky Henderson trained 2020 Coral Cup winner.

Saint Sam (4.15) trained by Willie Mullins and ridden by Paul Townend is tipped each-way in the G3 Boodles Juvenile Handicap Hurdle over 2m, noted when finishing second in G1 at Leopardstown in February. The threat is Paul Nicholls trained Houx Gris (ew) under Harry Cobden.

The post Willie Mullins entourage rolls out on day one of 2021 Cheltenham Festival appeared first on Horse Racing News and Tips.