The Civil Guard has arrested in Torrevieja ten members of a drug trafficking network led by a street sweeper who used much of his working day to distribute cocaine. Among those arrested is an 80-year-old woman , the mother of another detainee, who was paid 100 euros a month to make up the packages of cocaine.

He also employed a number of workers “on staff” who distributed on his behalf, to whom he paid a monthly salary of 600 euros.

The Civil Guard began their investigations in May of last year after learning that a man was taking advantage of his position as a street sweeper to mask the sale of cocaine.

This worker was the leader of a group of distributors and during his workday he dispersed and sold doses of cocaine directly to consumers. In this way he made sure that he did not raise suspicions.

The business grew and the suspect was earning 600 euros a day, so he sought out several colleagues to help him distribute the drug to consumers. He paid them a salary of 600 euros per month, but they had to comply with “a strict schedule that began at eight in the morning and ended at eleven at night, according to the Civil Guard. 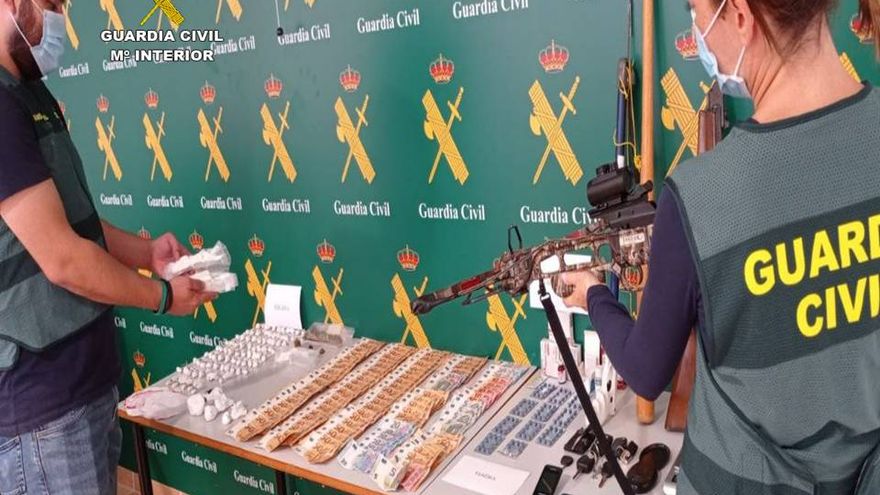 The investigation revealed that if these workers did not render accurate accounts to the boss, he did not hesitate to use violence against them, regularly giving them brutal beatings.

Once identified, the Civil Guard arrested ten people, five men and five women, aged between 25 and 80 years old. They also searched three homes in Torrevieja, one of them owned by the leader of the network. Inside they seized 211 grams of rock cocaine, marijuana buds, doping substances, several doses of viagra, a frequency inhibitor, a baseball bat, nine nine-millimeter parabellum cartridges, a hunting crossbow, a compressed air rifle, two vehicles, a motorcycle, and more than 3,000 euros in cash.

The detainees are all accused of a crime against public health and another of belonging to a criminal organisation. The leader of the organization is also charged with a crime of money laundering.

Two of the ten detainees have been remanded in prison.