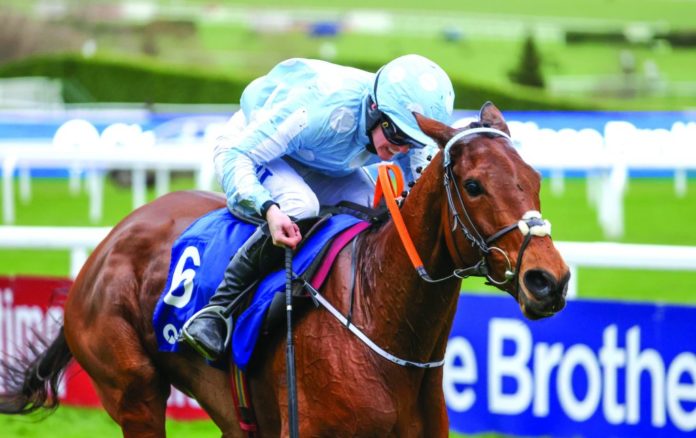 Trainer Henry de Bromhead who has a plethora of runners at the Cheltenham Festival talks about some of his entries. Cheltenham Gold Cup: A Plus Tard: “I am delighted with him – we decided to put him away for this. There aren’t many horses that can win a Grade 1 over 2 miles and be in the Gold Cup picture.

“It’s going to be a cracking race – and very competitive – as you would expect,” he said.

Unibet Champion Hurdle entry Aspire Tower: “He ran really well at Christmas and we decided to go straight to the Champion Hurdle. I’m very happy with him – he’s in great form – we’ve put him away for this.”

Balko Des Flos in the Glenfarcas Chase – or Ryanair Chase: “We’re leaning towards the Cross Country – he’s in the Ryanair to – we haven’t really decided yet. He’d love the cross-country fences, he’s really enjoying it. It would be his first time doing it so would be in at the deep end.”

Bob Olinger, Ballymore: “I’d be leaning towards the Ballymore with Bob Olinger. He seems great and we’re delighted with him, hopefully Cheltenham will suit. He works well on good-ish ground, so hopefully he should be fine.”

Cappuccimix: “I think we’ll go in the Grand Annual, he’s in good form. Over two miles on the Old Course, I think should suit him.”

Captain Guinness, Sporting Life Arkle Trophy: “He’s brilliant and is in great form. I’m happy with him and I’m looking forward to running him. I think it will really suit.”

Chris’s Dream, Ryanair Chase: “He great and I think we’ll have a go in the Ryanair. He’s done really well and has been brilliant for us – I think he could run well.”

Eklat De Rire, Brown Advisory Novices Chase: “He’s two from two so far – he’s done nothing wrong this year, and he won his Grade 3 very impressively. He jumps his fences really well and we’ll find out how good he is there and see if we can give Monkfish a race.”

Honeysuckle, Unibet Champion Hurdle: “She seems in good form. We were delighted with her at Leopardstown winning the Irish Champion Hurdle. She looks very good over any trip of two miles to two and a half miles.”