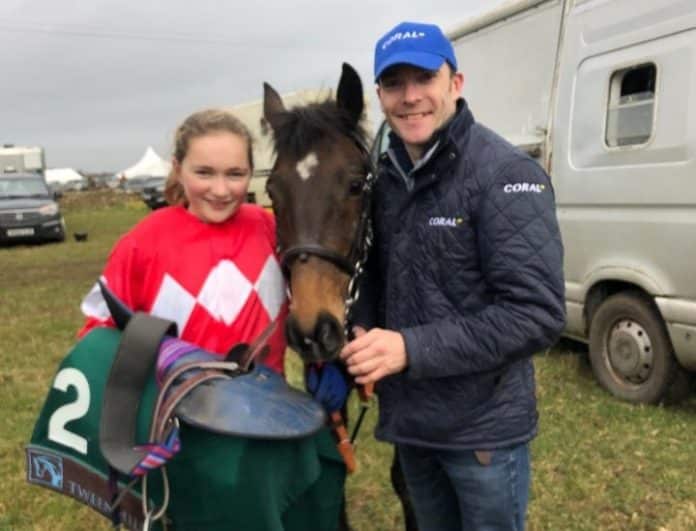 Margot Scudamore, daughter of jump jockey Tom, who wrote a letter to PM Boris Johnson to move the 2021 Cheltenham Festival a week – so she could watch him on TV – fell at the first fence, with schools returning on March 8, amid the coronavirus lockdown.

Margot, 14, who has ridden Kingswell Theatre at the stables of her uncle, Michael Scudamore, will miss the 12-year-old, ridden by her dad in the Glenfarclas Cross Country Chase.

Margot asked the Prime Minister to delay the return by two weeks – or allow schools to show the racing on television!

“I heard the news that we were going back to school the week before Cheltenham so I wrote a letter to the PM. 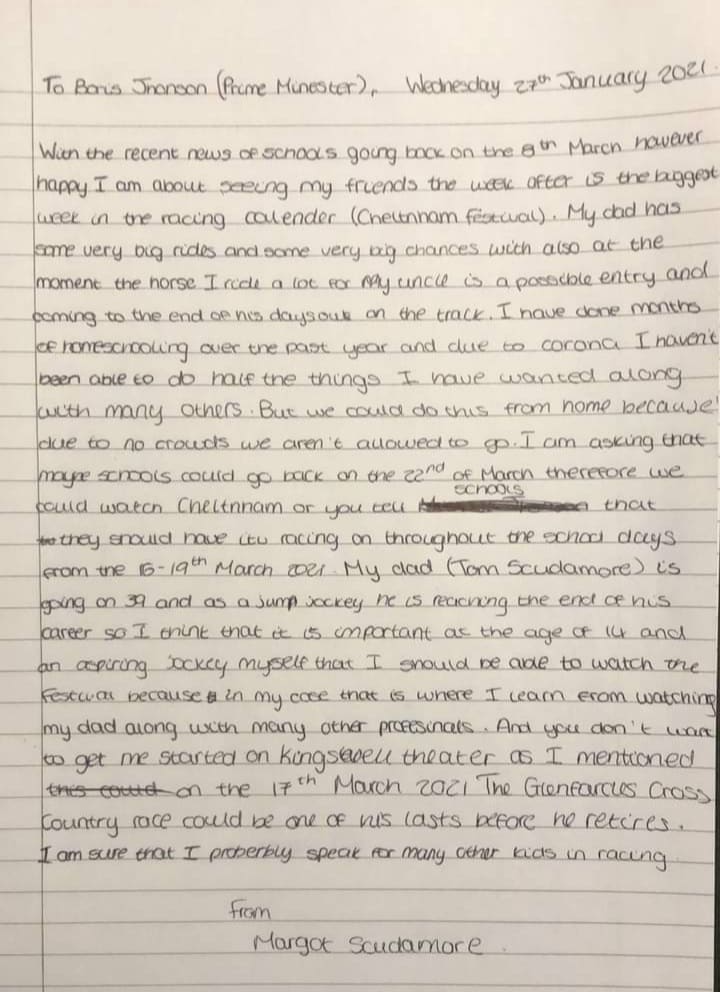 “I probably won’t be able to go to Cheltenham, so I’ll have my phone under the table.

“All my friends are interested in racing. It’s a great sport. Back at school on March 8,” said Margot who has ambitions to be a jockey.

Her great grandfather Michael won the Grand National on Oxo in 1959, her grandfather Peter was champion jump jockey eight times, her father Tom is a leading jump jockey and her uncle Michael a successful jumps trainer.

“I’m not into any education. I’m all into my riding. I’ve been riding out for almost three years. At my uncle’s I saw on the board I was down to ride Kingswell Theatre. It was amazing as he had won at Cheltenham.

“He’s been the only one I’ve ever wanted to ride. I’d like to ride him a lot more. He’s very special. I ride him every time I go up there. I used to go every other weekend and spend a couple of weeks there in the summer.

“It’s pretty good experience and I’d like to be a conditional jockey for my uncle when I get older.

“Dad wants me to get all my school work done and then do that afterwards hopefully. I would like to go to equine college,” said Margot.

“I’ve been able to get on the pony circuit and dad’s been a massive help.

“It’s so cool to be involved with a horse like Kingswell Theatre. I hope he doesn’t retire yet. He’s still got a lot of life left in him – and so has dad. They both have.”

Margot asked for the return to school to be put back to March 22, or tell schools they should have racing on TV throughout the the schooldays during March 16-19 so they could watch the Cheltenham Festival.

“With schools returning on March 8, the week after being the biggest week in the racing calendar, I’ll miss watching my dad- who has some very big rides,” rued Margot.

Tom Scudamote said: “It’s caused a bit of mirth. She’s been home schooling during lockdown and I was going through her homework – and came across the letter.”