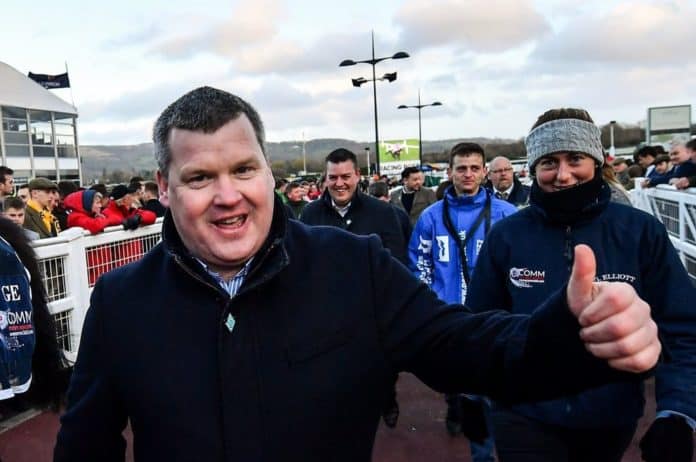 Trainer Gordon Elliott has been banned by the British Horseracing Authority for a year – with 6 months suspended – after he was photographed astride a dead horse that rocked the racing world.

Trainer Lucinda Russell, winner of the Grand National in 2017 with One For Arthur, was so shocked by the photo that she apologised to the horses in her care.

“I think it’s wrong to have that image about racing, I mean it’s not like that – we adore our horses,” said Russell.

Elliott appeared in front of the BHA on March 5 with the punishment meaning he cannot run horses under his name until August.

It is deemed his horses are likely to compete for another trainer from the same Cullentra stables where 80 staff are based.

Elliott, 43, does not intend to appeal against the penalty, which rules him out of several major meetings – including the Cheltenham Festival during March 16-19, the Aintree Grand National on April 14 and at Punchestown.

Elliott’s racing empire, built over 15 years, has been seriously damaged by the controversy which saw horses removed from his stables including Envoi Allen, one of eight horses moved to other trainers by owners Cheveley Park Stud. Two sponsors have also withdrawn.

“I am paying a very heavy price for my error but I have no complaints,” said Elliott.

“It breaks my heart to see the hurt I have caused to my colleagues, family, friends and supporters. I have a long road ahead of me but I will serve my time and then build back better,” added Elliott.

The post ELLIOTT TO MISS CHELTENHAM AND AINTREE AFTER BHA BAN appeared first on Horse Racing News and Tips.