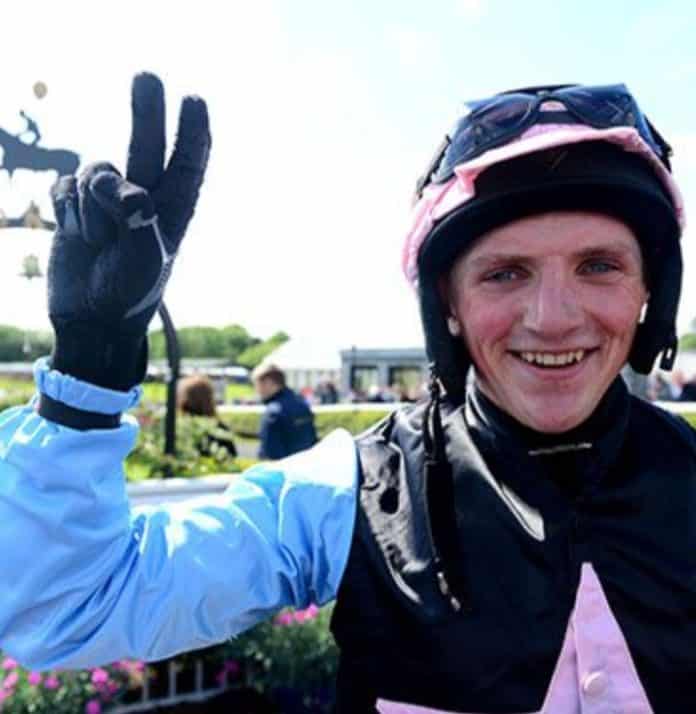 Young Dev – tipped by fromthehorsesmouth.info – touched 499-1 in running on Betfair – in the Handicap Chase at Navan on Sunday having broke a stirrup after the first of 17 fences, with jockey Hugh Morgan riding without irons for the remainder of the 3 miles race.
Morgan, 25, miraculously stayed in the saddle, to gain a 3/4 length win on board seven-year-old Young Dev for trainer Denis Hogan over See Mo Laoch, with Dubai Devils, third.
“My right stirrup broke after the first and I kicked it out,” said Morgan.
“I said ‘I might as well keep going’ – I’ll be sore in the morning!,” he quipped.
Morgan’s brilliant ride was applauded, after being clapped back into the Parade ring.
“It took a bit of getting used to going down to the fences without the irons – I just left him to sort himself out – and gave him a squeeze,” said Morgan.
Despite the experience, unfazed Morgan said: “I felt comfortable, he’s a safe old jumper, so I was happy enough to keep going.
“Going up the hill I thought they had got away from me and I just gave him a chance.
“He’s a horse that doesn’t like hitting the front too soon – so it worked out ideal. Going to the third-last, I felt I had them covered.”
Joyous Morgan added: “It was great and my first ride for Denis – it’s very important to get a win.”
*Gordon Elliott trained Coko Beach (5-4f) tipped by fromthehorsesmouth.info won the Navan Grade 2 Novice Chase ridden by Jack Kennedy.
Caption:
Hugh Morgan rode Young Dev – tipped by fromthehorsesmouth.info – 499-1 in running on Betfair – having broke a stirrup.