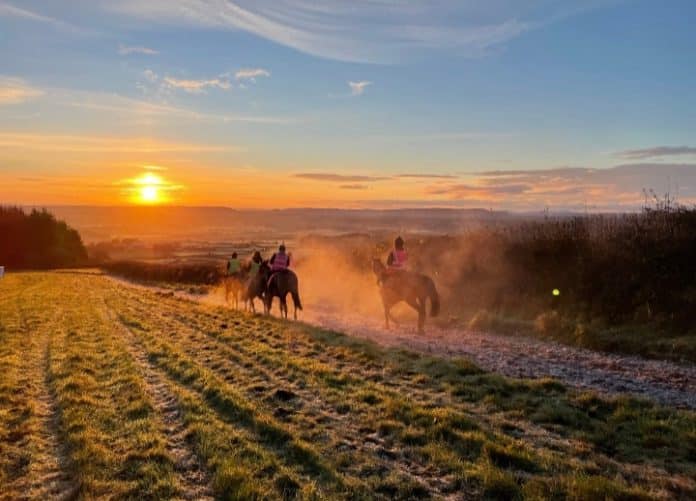 Trainer Kerry Lee notched up a century of winners following Ballybegg winning at Wetherby on February 17, under Richard Patrick.

“Ballybegg is a smart horse and put on a brave performance under at penalty with Rich Patrick in the saddle to record my 100th winner in England,” said Kerry.

Kerry, Welsh National and Grade 1 winning racehorse trainer, who assisted in the running of her father Richard’s successful stable, prior to taking out a trainer’s licence, has a stable of 31 horses in training.

Based at Byton, The Bell House, nestling in the rolling Herefordshire countryside, the purpose-built yard features a six furlong private all weather gallop known as Brand Hill, schooling grounds, including cross-country jumps, brush hurdles and fences, as well as extensive woodland hacking. “The yard is located on the Shropshire and Welsh borders. Bangor, Cheltenham, Chepstow, Ludlow, Worcester and Warwick are deemed racecourses as our local tracks,” said Kerry.

Former champion jockey Richard Johnson is based locally: “Richard is a giant of the sport and he’s as hungry and driven now as he was 20 years ago.

“He’s ridden multiple winners for both myself and my dad down the years, including a hat-trick of Grade 2 chases on our stable favourite, the evergreen and much loved Top Gamble.

“Remarkably those successes came in three different countries, via victories at Ayr, Newbury and Fairyhouse. Great days all of them and we are always happy to have him on our side.”

Stable star 10-year-old Happy Diva has seven wins to date, including the Grade 3 Bet Victor Gold Cup Handicap Chase Cheltenham in 2019, and including victories at Ascot, Bangor, Ludlow and Wetherby.

The post Kerry Lee notches-up century of winners with Ballybegg at Wetherby appeared first on Horse Racing News and Tips.