The work in the Orihuela cemetery, to locate the remains of the 17 people shot dead by Francoists a few months after the close of the Spanish Civil War, has ended.

However, the Ministry is yet to decide whether to continue with the search for bodies using other techniques.

Even though all the testimonies and explorations pointed to the same location, nothing has been found. Investigators are now to decide whether to call in more sophisticated equipment or to extend the search beyond the present site.

In mid-November 2020, the works began. A week later, the Regional Minister for Participation, Transparency, Cooperation and Democratic Quality, Rosa Pérez Garijo, visited the Orihuela cemetery. As a result of her visit the Ministry allocated a budget of 23,776 euros. 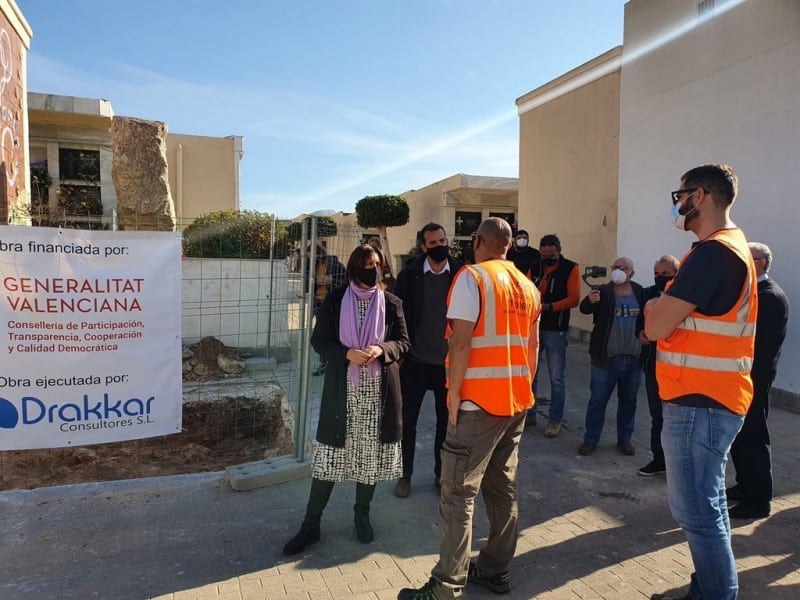 However, the monies are still understood to be available as the company carrying out the investigation, Drakkar Consultora, agreed that it would charge based on exhumed bodies.

Descendants of those who were executed were also present during that visit. Mari Carmen remembered her mother’s words in her description of the location of the grave. “To the left of the entrance, in front of the wall.”

She was referring to the rear of the cemetery, an entrance with difficult access, and the wall that surrounded the Catholic cemetery. This is where the first excavations were carried out. However, in that first dig, at a depth of 40 centimetres, the archaeologists came across a bed of rock, which ruled out any likelihood of the graves being at that site.

A few days later they carried out a second dig a few metres to the right, following the same line as the wall of the cemetery, but the result was the same.

From a number of aerial photographs taken in the 60’s, they could see that a water tank had been built and installed a few metres to the side.  Witnesses remember that a priest said he thought that about that time, the bodies were moved from the area to a tomb. Those who were told of the transfer point out a great lack of consistency with contradictory and doubtful information. There are also no records held by the Church.

The archaeologists then conducted a third dig. In it they did find the existence of a hollow which they suspect may have been used at that time, but they found no evidence of any bodies.

“The options would seem to be that they removed the bodies, or when they built the water tank they destroyed the grave.”

The difficulty now of locating the graves and finding the bodies is that everything points to the remains being located under another row of graves. This makes it difficult to determine the exact location of the burial site and the bodies without disturbing those lying above.

Meanwhile, in 2008, a monument placed by the Ateneo Sociocultural Vientos del Pueblo de Orihuelaof Orihuela, pays tribute to the 17 residents of Orihuela, Benferri, Jacarilla, Redován, Almoradí, Catral and Torrevieja who were shot on October 14 and November 17, 1939.

Visit of the minister Rosa Pérez to the Orihuela cemetery.