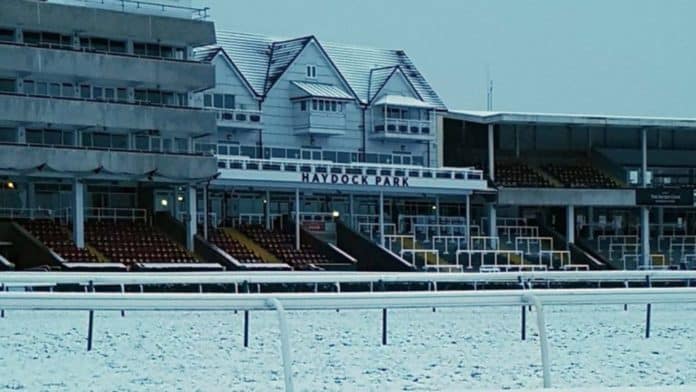 Frost covers are down over the whole course at Haydock Park after it passed an inspection at 8am on January 23, ahead of Saturday’s meeting.

There will be a precautionary inspection at 8am on Saturday, in view of the risk of frost. The going remains Heavy.

Temperatures are predicted to dip to -2 degrees Celsius on Friday night, while Saturday is forecast to be dry.

 Nigel Twiston-Davies is  represented in the feature handicap chase of the day, the Peter Marsh Limited Handicap Chase over 3m 1.5f, by Crievehill ridden by Sam Twiston-Davies.

“Crievehill runs in the Peter Marsh Chase. He has plenty of ground to find with Royale Pagaille on their Kempton run, but he is a winner at Haydock and hopefully can rediscover his best form,” said trainer Nigel.

Owned by Highclere Thoroughbred Racing, the nine-year-old won a handicap chase over the course and distance in November, 2019. In line with his excellent record at Haydock Park, Twiston-Davies has landed this contest twice with future Grand National hero Earth Summit (1995) and Bristol de Mai (2017), who has gone on to land the G1 Betfair Chase at Haydock Park three times.

Heading the weights and market for the Peter Marsh Limited Handicap Chase is Royale Pagaille, trained by Venetia Williams and ridden Tom Scudamore.

The lightly-raced seven-year-old, owned by Rich and Susannah Ricci, has been hugely impressive on both his starts this season with handicap victories at Haydock Park and Kempton Park.

He holds an entry in the G1 Cheltenham Gold Cup and if successful could bid to follow in the footsteps of Little Owl (1981), The Thinker (1987) and Jodami (1993), who all took the Peter Marsh Limited Handicap Chase, prior to tasting success in chasing’s Blue Riband later in the same season.

Other leading contenders for the Peter Marsh Limited Handicap Chase include Sam Brown tipped by fromthehorsesmouth.info trained by Anthony Honeyball and ridden by Richie McLernon, a G2 winner on this card last season as a novice, and Sam’s Adventure trained by Brian Ellison and ridden by Ryan Mania, impressive winner of the Betfair Tommy Whittle Handicap Chase over the course and distance on 19 December.

The post Frost covers at Haydock after passing inspection ahead of Saturday’s meeting appeared first on Horse Racing News and Tips.