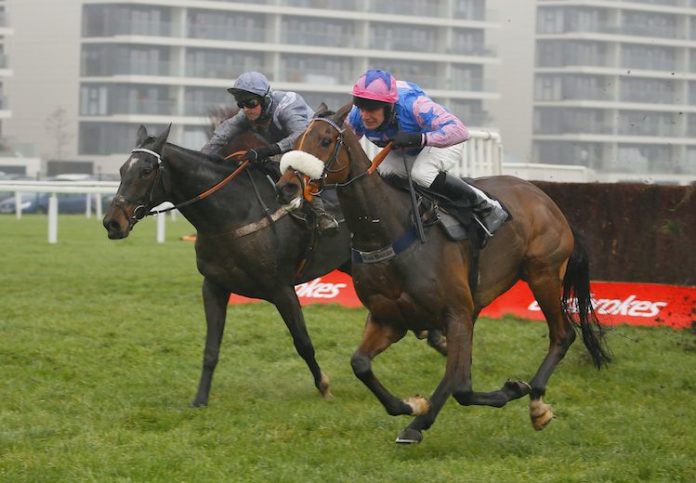 Nicky Henderson trained Santini has been supplemented at £5,000 to run in the Ladbrokes King George VI Chase at Kempton Park on Boxing Day: We’ve joined the party!

“We’re going to join the party. We’re up for it and looking forward to it,” said Henderson.

“It looks a strong race and we’ve been monitoring the entries.

“From what we’ve been told Monalee will be coming and is able to travel. If all ten stand their ground then we’ve got to finish fifth to cover our supplementary fee,” said Henderson.

Henry de Bromhead trained Monalee remains in the line-up for the King George, despite concerns over travel restrictions due to the new strain of Covid-19.

Speaking of the coronavirus situation, Henderson said: “When you’re in Tier 4 you haven’t got a lot to do and on Sunday afternoon a wild idea occurred to me.

“The Cotswold Chase is too far away. We discussed it (King George V1) and he’s so well in himself.

“My worry is that Kempton isn’t an ideal track for a big galloping type like him, but there isn’t much else to do with him.

“He wakes up for racing, you can’t work him enough. Having to wait another month would be so boring for him.

“He loves racing and working, he thrives on it. He’ll love it and, win or lose, he’ll enjoy himself and within two days he’ll be bucking and swinging again.

“He can be quite lazy in his races and doesn’t take too much out of himself. Some need massive breaks between races but the more you do with him the better he seems to be. “This wasn’t in plan A at all but there is not much else to do and we even toyed with a hurdles race,” said Henderson.