DES O’Connor was one of the main reasons why Freddie ‘parrot face’ Davies became a Redcoat at Butlin’s over 60 years ago, the 83 year-old star has revealed.

“During my national service I badgered a young comedian I had seen on stage at the Newcastle-on-Tyne Empire,” Freddie exclusively told The Leader.

“I frequented the Empire during my time as a National Service Private in 1957,” said Freddie, who served in the Royal Army Pay Corps.

“The young comic was Des O’Connor – and outside the stage door of the Empire I accosted him.

“He kindly suggested that, like him, I should try to become a Butlins Redcoat,” said Freddie. 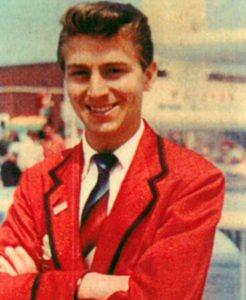 “As soon as I was demobbed in January 1958 I applied for an interview and somehow I got the job!,” said Brixton, London born Freddie.

“I started in early May 1958 and became the Tombola caller – Bingo – a job which surprisingly taught me how to interact with an audience.

“I did this for two consecutive years and was also doing sketches in the Redcoat show,” said Freddie.

“My six years at Butlin’s turned out to be the best possible apprenticeship for anyone aspiring to be a performer.

“When I left the company in 1963, within 12 months I had appeared before 20 million people on Opportunity Knocks – and was on my way to becoming a household name – a bit like Dettol!,” quipped Freddie.

Freddie, 83, and Des O’Connor, 88, have a combined age of 171, with both of their careers beginning as Redcoats. 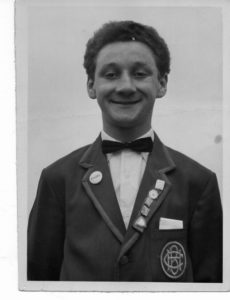 Being a Redcoat saw you on the frontline staff at Butlin’s holiday camps in the UK with duties ranging from adult entertainers or children’s entertainers, to Stewarding.

Sir Billy Butlin, who opened his first Butlin’s in Skegness, celebrated their 85th anniversary in 2020.

Famous designers of the Redcoat uniform include Jeff Banks and Zandra Rhodes.

A number of famous entertainers who have been Redcoats include Davies, O’Connor, Jimmy Tarbuck, Michael Barrymore, Jimmy Cricket and Ted Rogers, that gave them a path of joining the Equity trade union, thus allowing to perform throughout the industry.

He was evacuated to Northampton during the second World War, completed his National Service in the Royal Air Force, and worked as a Redcoat at Butlin’s in Filey.

Davies, evacuated to Seend, a small village in Wiltshire, at the start of WW2. He began his career at Butlin’s  in 1958, and found stardom after appearing on Opportunity Knocks in 1964, said: “I only ever wanted to be a comedian, that was my dream, my ambition in life.

“It was set in stone in my tiny brain, that is what I wanted to do from a very early age of ten, after I had visited the Salford Hippodrome on Cross Lane, Salford, now greater Manchester.

O’Connor died peacefully in his sleep in hospital last weekend where he was recovering after taking a fall at his Buckinghamshire home.

“Des O’Connor was my first mentor. It stood me in fine stead and I was soon on my way to success.

“His advice was invaluable.  I also did several Des O’Connor TV shows – my regret was that he could not recall our first meeting,” said Freddie.