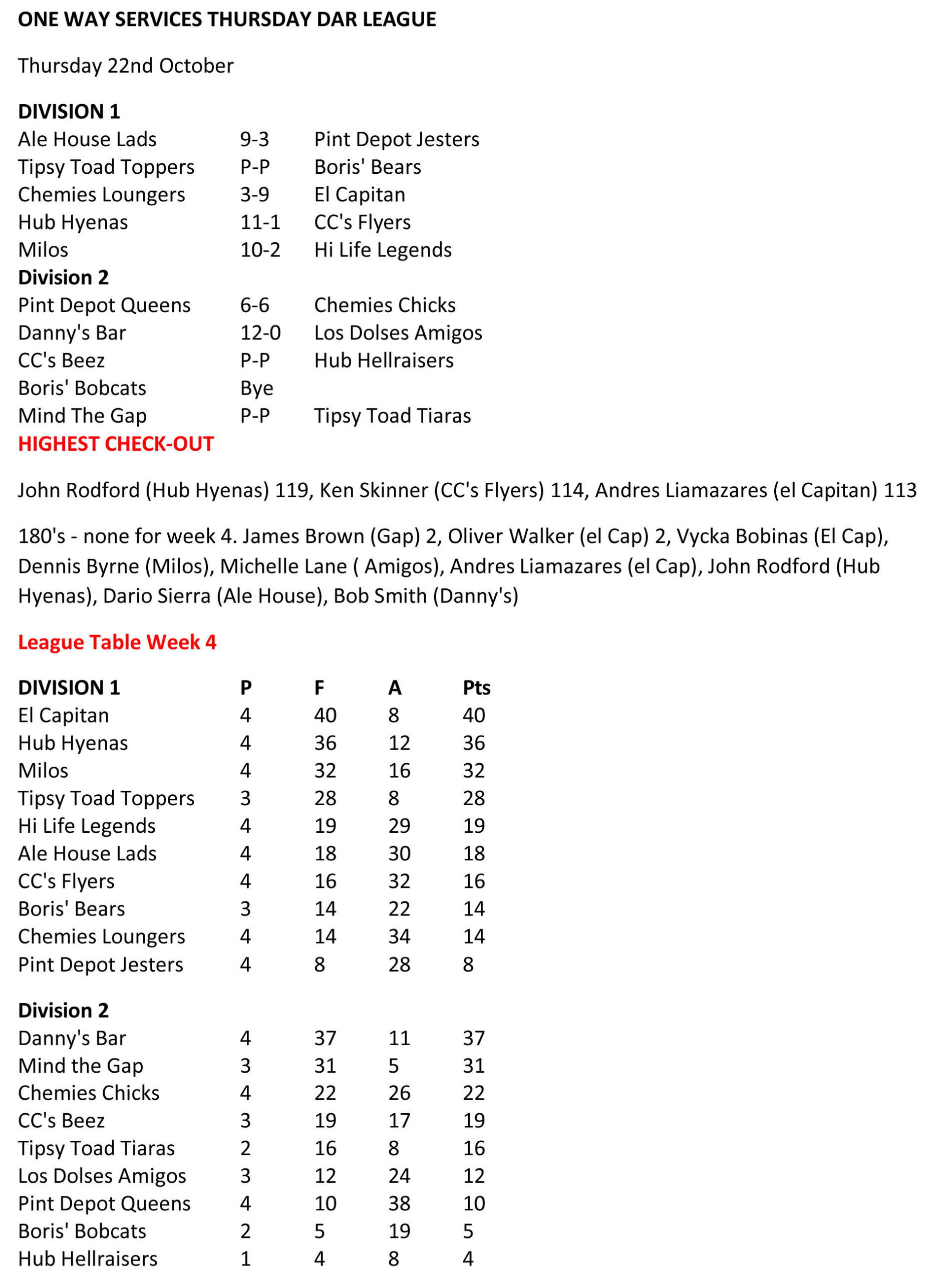 Plenty of Covid 19 dialogue in the past week. Lots of unfounded rumours circulating, but plenty of rule / regulation flouting. Rumours are one thing, they can be dismissed by a phone call if necessary, but ignoring the law re mask wearing, social distancing etc is putting individuals welfare, possibly lives at risk, is a definite No Go.

Examples of this are now too many to ignore and may require a temporary stoppage or more of the Thursday league. Previous warnings have gone unheeded for some, the majority conforming, there is now the distinct possibility of temporarily losing one of our winter pleasures.

Chemies Loungers put up a decent show facing the visiting table toppers and current champions El Capitan. Andres Liamazares managed 3×100 in the first triple closed by Marcos Lopez on D8, despite tons from Graham White and Mike Tierney. A ton and D15 from Mark Sommerville made it 1-1.

C.C.’s suffered a third defeat in four this week when visiting the Hub. Some familiar faces from the past graced the oche at the Plaza venue. Kevin Procktor, Richard Pattison and the affable Amanda Skinner, a former league singles champion, proving she can still throw a mean arrow or three.

Unfortunately, despite numerous opportunities, the Flyers failed to convert these to winning legs. Ken Skinner being the lone winner in the third triple on D7. Bob Taylor opened the Hubs account in the first on D10, after 140,100 from Alex Nikolov, plus a ton from Simon Williams.

The Flyers upped their scoring rate after devouring some nourishing half time fish and chips, it was however matched and surpassed by the Hyenas. Miller free scoring 120, 132 plus D20,D1, without a reply from Brian Newton.

Williams 3×100 achieved the same result with D5,D9, against Neil Poole. Skinner 140, faced Rodford in the next giving a good account of herself, narrowly missing out on a 116 out by clipping the D20 wire, Rodford closing the second leg on D16. Denness took the fourth single, finding it easier to hit doubles than trebles. D16 for the first and then a nice 84 out S20, D14, D18, for 2 zip.

Tasty bit of showboating by the co league sponsor. Ken Skinner went one up on D8 against Taylor 2×100, the Hyena making it all square with an 81 game shot, T17,D18, and then D1 for 2-1. Nikolov wrapped up the match on D4, D10, without reply from a below par Procktor. MOTM Rodford and a split decision between the Sinners, finally awarded to Ken.

Bit of a surprise package our Bob Smith (Robert to mum) the amiable captain of  Dannys Bar darts team. The former “29 Commando Regiment” soldier, saw active service in the Falklands, Northern lreland, the Gulf, Belize and Kenya, before moving on to the Royal Artillery regiment. His final service term in the A.G.C unit (Adjutant Generals Corps) as a Warrant Officer came before leaving for “civvy street” at the age of 55 after a 35 year stint.

Stationed in Germany for many years, Bob has witnessed many of the bloodiest conflicts in modern times, but like many is reluctant to be drawn on the subject.

Now leading a more sedate life style, settling on the Costa since 2017 with engaged partner Jane, Bob can be seen every Friday pulling pints at Dannys. 20 year old son Rhys who lives in Germany vows he won’t be following his father’s footsteps as a one-time Teddy boy. The soldier elite was never out of drapes, suede shoes and the mandatory DA haircut, sadly now just fond memories.

The former Essex boy, born in Maldon, is a pretty useful darter using 13g arrows yes 13g. A former Essex County player, even plays golf off a 2 handicap at La Serena (the course with lakes as fairways). Partner Jane plays off 13, not a bad two ball. Bobs golfing ambition is to record a 66 at La Finca, a 67 at Las Colinas is already in the bag.

The ex-Commando’s ideal 3 dinner guests would be, fiancé Jane, Neil Sedaka and Adele, devouring a rare, even blue steak, washed down with an occasional Bacardi n Coke. Surprisingly having watched Grease 25 times, it’s his fave film. Explanation? lt was the only film to hand whilst waiting to be airlifted home after the Falklands conflict.