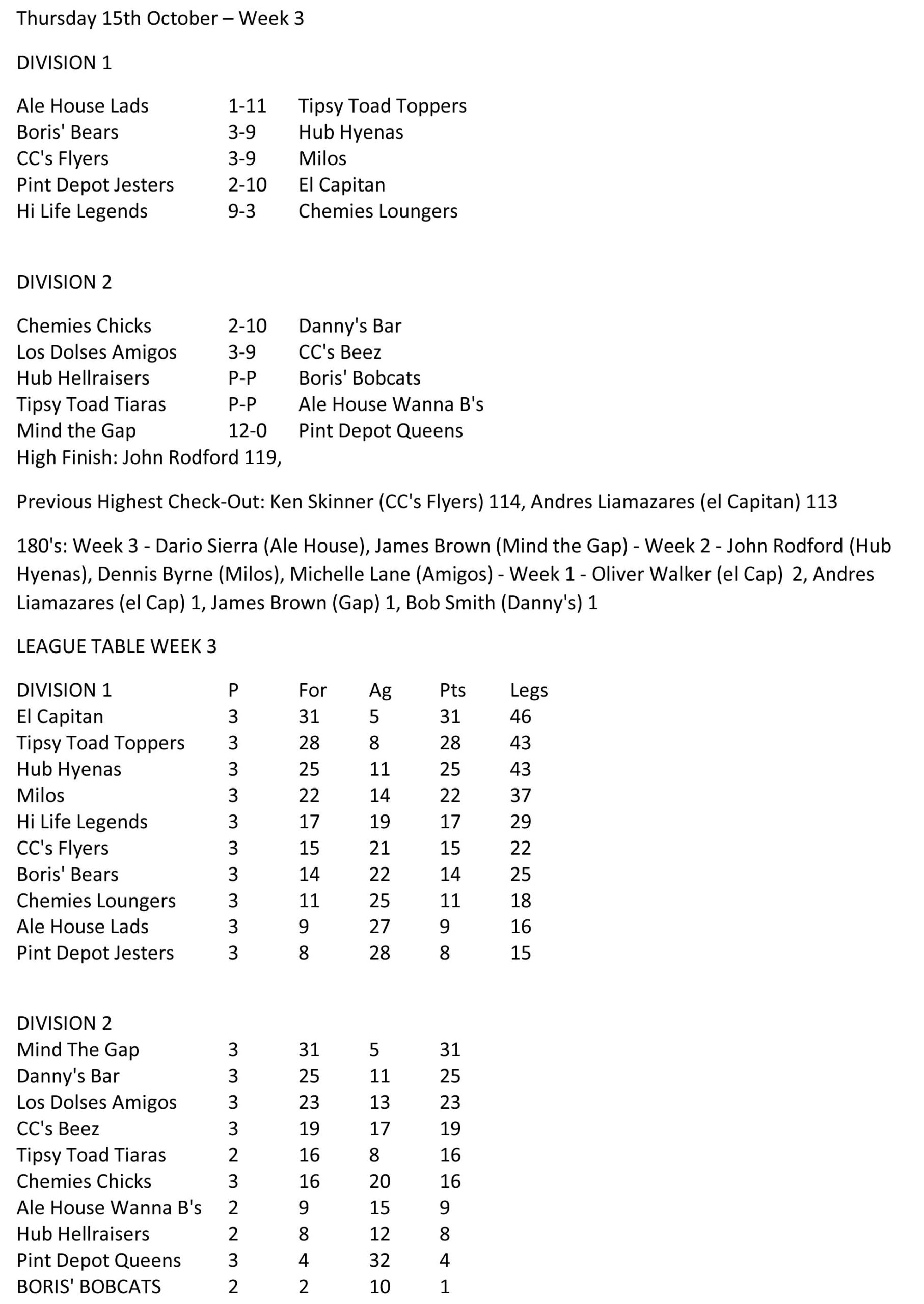 Hi Life Legends had the pleasure of a visit from the Loungers of Chemies this week, finding themselves 1-2 down after the triples. Legends Sarndra David 100,99 top scoring for the hosts, but Jimmy McKay D7, gaining the advantage for Chemies prior to the pairs. Gino Rouzee ( the Governor ) levelled, followed by a Boris Ostrowski 100,123 and D1 to nudge Hi Life ahead.

The Davids, Tezza and Sarndra scored heavily in the sixth, but couldn’t capitalise, Loungers McKay and Mike Tierney D5, nicking the leg for 3-3. All singles went the hosts way, Les Adams 140, John Crabbe 121, Rouzee 100 and finally Legends skipper rounded off the evening on D16.

Despite the previous weeks defeat, Campo Verde outfit Dannys Bar slip into second place behind Gap after this weeks successful visit to the comfortable surroundings of Chemies and the Chicks. A 1-5 half time scoreline, were achieved by Jane Wills D2,,D4, the other providers, Mike Randall D7, Steve Scott D9, and Bob Smith D16 making it 0-5, before Sharon Williams D1 reduced the deficit.

An even older veteran ( is that possible ) Peter Ayres finished his 501 on D14, for victory over Nesbitt, the remaining two matches going Beez way, via Andy Flavell D2 and Suso Madrid D10. The latter just squeezing out the talented Harvey Lane 2×100. MOTM Todd and Jesus Madrid.

lt was a first visit to Boris’ Bar for the Hub after the home sides venue transfer from Trinity. Some might find the pool table a little too close for comfort when throwing, but otherwise an excellent oche in the upstairs games area. The Bears went ahead with a Brian Nash D4, his partners in the 3 Sid Cross and Ron Chadwick providing the scores.

John Rodford made it one apiece with a tasty 119 out on D20. lt was soon 1-2 courtesy of Joe Miller on D16. Martin Hastings opened the pairs with a D11 for 2-2, the Bears almost stole the fifth, Chadwick and Nash (sounds like a sixties band), nearly taking advantage of poor finishing from Rodford and Durrant 140,100, the latter eventually closing on D2.

Cross 100 joined Yvonne Roufignac 114 in the sixth to face Bob Taylor and Miller, the match featuring 4 tons or more and plenty of 80+’s, the result however going the Hyenas way, Taylor closing on D20. Break score 2-4.

Despite some impressive scoring and a finishing D8, Ray Hayes couldn’t supress (nor anyone else ) a lively and animated Simon Williams who went on to close the 2nd and 3rd legs for 2-5. Rodford increased the Hyenas advantage on D16 and D4 without reply.

Durrant replicated the score with identical two dart outs S10 D18, against the Bears number one Cross. Roufignac 100, 81, 85 had the pleasure of a 10th leg match against the vociferous Bulgarian Alex Nikolov 140,85,85, and forcing a deciding leg only for the Hyena to use one dart for D16.

Taylor made it 8 for the Hub on D4 D16, without reply from Hastings, leaving Chadwick facing Miller to determine the final score. lt went to a decider, Miller finding D7 after a 140 and 5 scores of 80+, Chadwick forcing a third with a D8, and 117,85,85. MOTM Cross and Durrant.

*   Amigos Michelle Lane opened with a 180 in the rearranged Bobcats fixture this week. Peter Ayres ( he of Tin Tin fame ) also recorded a Maxi, unfortunately for him it was in the warm up. Michelle added a MOTM accolade winning all her participating legs.

*   Gap licensee James Brown was offering free shots to any of the Queens scoring a ton or more. No news to date on how many were downed, but my spy tells me the skirting board resembles a woodworm attack. Apparently James is offering the same ” shot for a ton ” to El Caps, should they play. Crafty old Brown.

*   Yet another opening 180, this time from Vycka Bobinas of El Caps, during their Pint Depot visit. ln the same game 6 foot 12 inch Aroldas Klimonis enjoyed 2 x 3 dart combination finishes, pretty hot stuff, but when you consider he’s throwing from around 2 foot 6 inches, he has a distinct advantage. Well done to all.

SPOTLIGHT ON THE ALE HOUSE 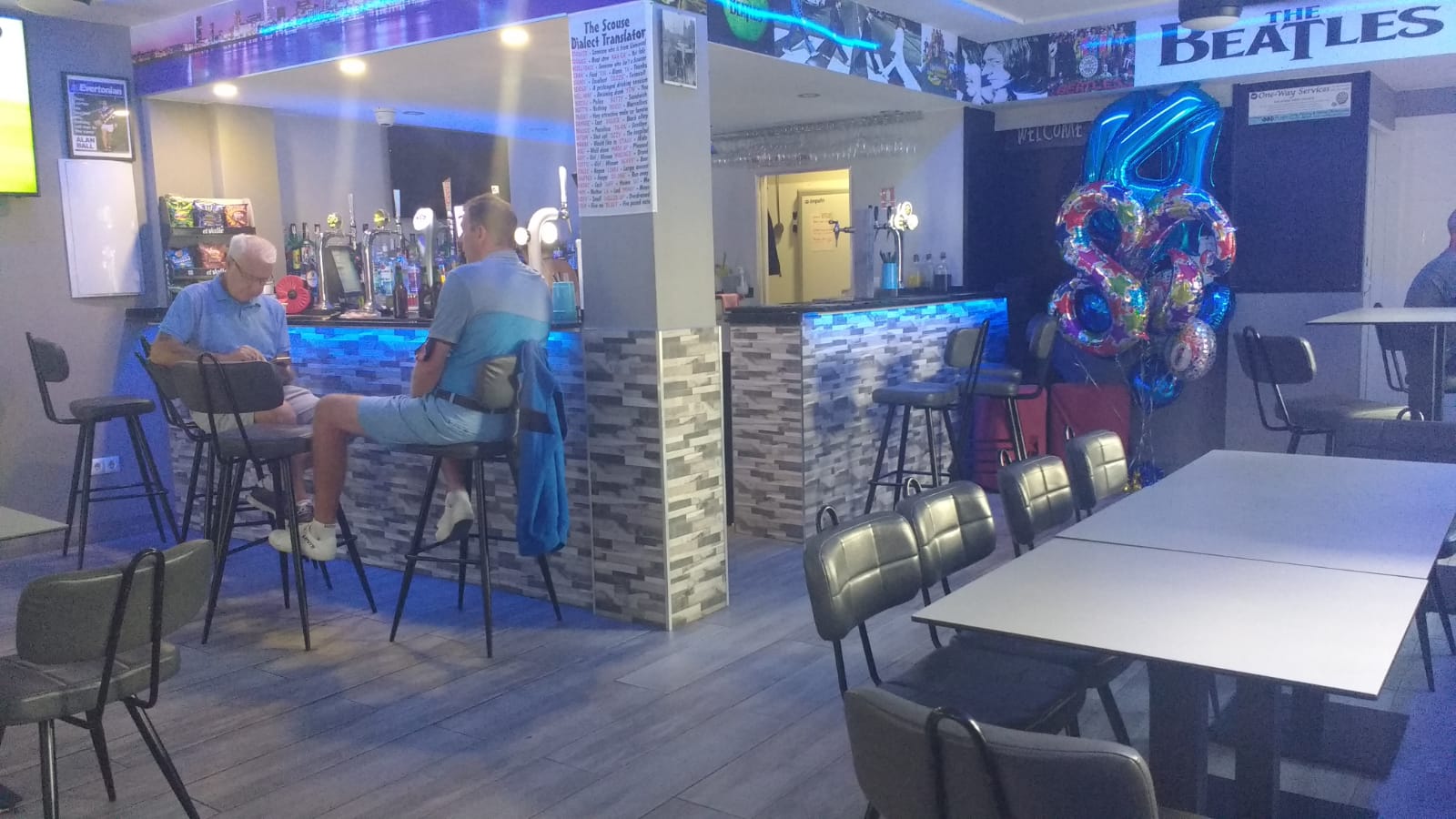 One time lndian restaurant, the Ale House, situated on the lower level of Villa Martin Plaza, is now one of the busiest bars at the much loved commercial quadrangle. Refurbished 18 months ago to a very high standard, the Ale House boasts 6 wide screen t.v.’s inside and a further 4 on the outside terrace, to accommodate racing, soccer and golf fans alike.

Fancy a flutter ? then utilise the in house licensed gaming machine, giving punters the chance of settling their bar tab. Licensee Karl Mallinson took over the popular bar 7 years ago and now hosts darts teams on both Mondays and Thursdays, along with the Plaza Golf Society, turning out weekly throughout the year.

Karl, who recently celebrated his 40th birthday, manages in his limited spare time, to enjoy a few hours fishing, or more importantly, regular visits to the gym to maintain his figure and youthful good looks.