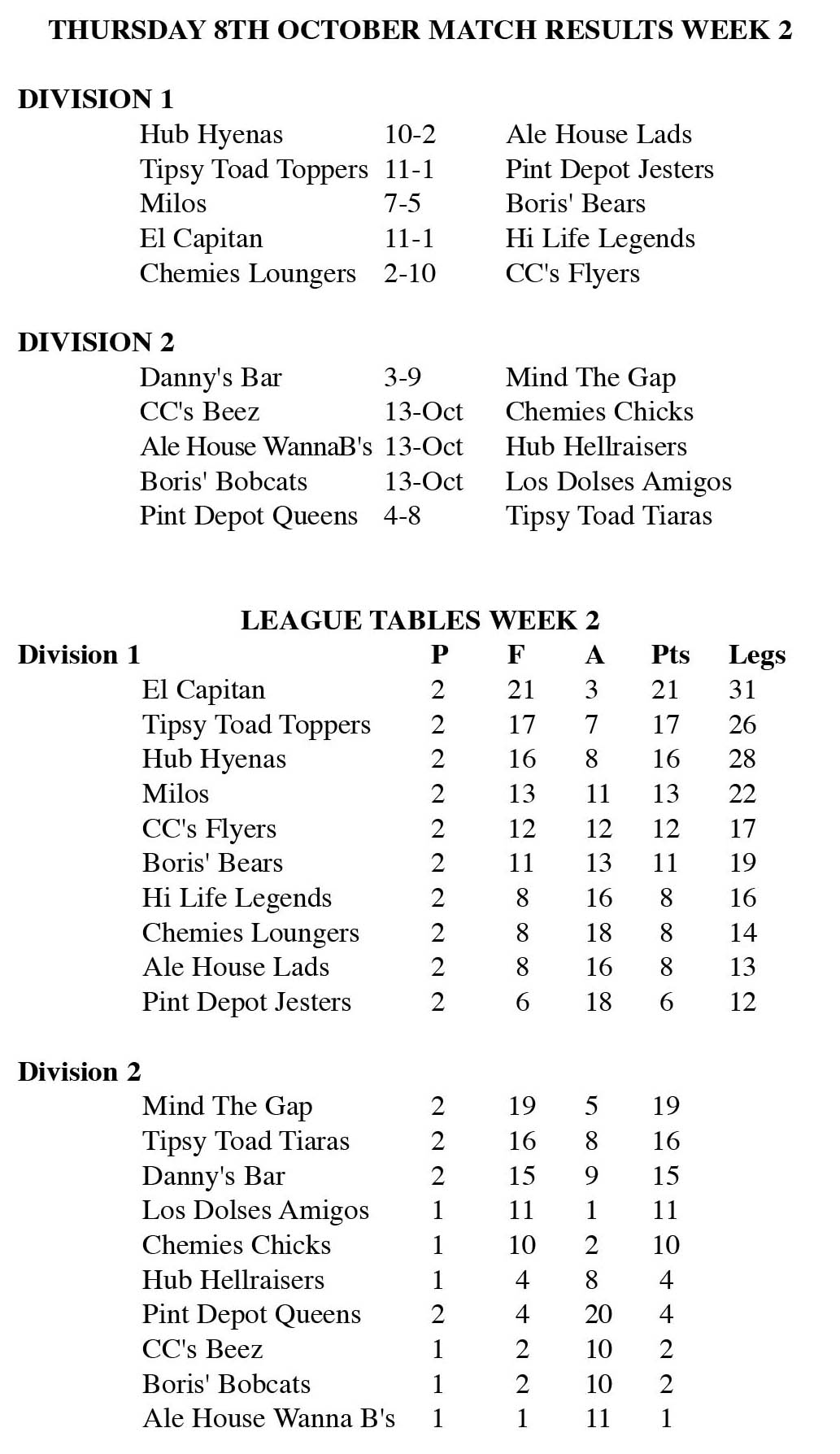 Covid 19 directives / regulations seem to be either ignored or misunderstood at the time of writing. l am informed that face coverings are to be worn in all bars when entering, playing darts or pool, or going to the bar / wc, in other words when NOT seated.

When seated face coverings may be removed as long as you have a drink. Both bar owners are at risk of hefty fines if these regulations are not adhered to. Financial reasons apart, self-isolation through contact is no laughing matter, it is stressful, inconvenient and above all is possible to prevent by following directives and the law.

Three matches were postponed this week, therefore would all captains involved, ensure these games are rearranged with immediate effect. Also on the agenda this week, home teams are obliged to forward result sheets by 10am Friday, correctly filled in as per example included in each captains pack.

Already this season this simple task has been forgotten. To eradicate this time consuming failure, the committee are contemplating an incremental fine procedure, with possible league expulsion. The problem affects league tables, newspaper copy and other relevant data.

Roger Phipps finally got the Legends away, with some fine scoring on the 19’s, coupled with a 52 out plus D10. Liamazares 2×140, 100, 99, made short work of Borys Ostrowski’s efforts. Klimonis 3×100, narrowly taking out John Crabbe 2-1 for 8 legs to 1.Bobinas D8, D4, increased the advantage to eight legs, Logan taking the Caps total to ten against a spirited effort from Les Adams levelling on D18 in the 2-1 defeat. Bettell completed the match with a 52 out, Sandra Crabbe pushing the Cap all the way with 4×80+’s. Roger Phipps was Legends MOTM.

The Plaza was really buzzing Thursday last, a decent crowd ready to enjoy the finale of the Summer music gigs and an expected lively Hub encounter with the Lads from Ale House. The four acts booked got the crowd “rocking n rolling” for an anticipated 3 hours of entertainment.

Plod stepped in after aprox. 45 minutes to halt proceedings indefinitely due to some infringement of guidelines. So it was left to the OWS match for amusement. Plenty of that, but the quality of darts a little lacking. One or two highlights primarily from Hub newby John Rodford. He opened the hosts account on S20, D20, Eugene Lane making it all square on D4.

Admittedly, scorewise, things brightened up at the resumption, but still only two combination outshots in 14 legs. Shane Denness overcame a painful arthritic throwing arm to defeat a useful lan Philips2-0, the score repeated in the second by Rodford who included a 140 and 180 in his rout of Tommy Jennings.

Well the Queens may have the royal title but the Tiaras wore the crowns this week when they returned to their chariots and descended the hill post-match.

It was somewhat lacking the usual ambience when the majority of both teams remained outside on the terrace, only sending the players, chalker and score-keeper into the upstairs dart area.  Good job the weather was kind as social distancing needs to be observed in tight spots.  Marie Cummins and Captain Lorraine Cox gave very good account of themselves gaining the first 2 triples, D1 and D2 respectively putting the Tiaras on edge until Lesley Eagles got her own D2.

Vi Turner then earned herself MOTM with a 3 – darter, shock finish (6 – 9- D1) against Pat Schofield and Wendy Hayward. A couple more D2’s from Elizabeth Cowan and Simone de Lacy brought the match to 3 all at halfway – may need to turn the board next week ladies!

From then on in it was the Tiaras all the way in the singles (Wendy D10, Lesley Eagles 100, D1, Lisa Ivill D8) until Lorraine played a blinder against Patty Poo in the 4th Singles, clocking up a 126 and checking out quickly on D8 before Poo could get a look in.  Elizabeth’s D1 and Simone’s D5 gave the tiaras the much-coveted overall victory. MOTM for Tiaras – Lesley Eagles.

This was very much a local derby with the Jesters taking the short stroll down the hill. The result suggests that the home side dominated proceedings but the away team put up a spirited defence led by Matt Cummins whose solid darts earned him man of the match.

There were some good performances from the home side – Lee Maiden once again led the way with a fine victory over Matt – scores of 140, 125 and 100 and two quick fire finishes earned him the home team man of the match.

Also worthy of mention were ‘new boy’ Jem Gledhill 140, 121, 136 and ‘old boy’ Hugh Galloway with eight scores over 80 in his two singles legs. Even older boy Baz Schoffield won his singles despite head butting the floor on Monday. You know what they say about a bang on the head –  ‘ere we go!