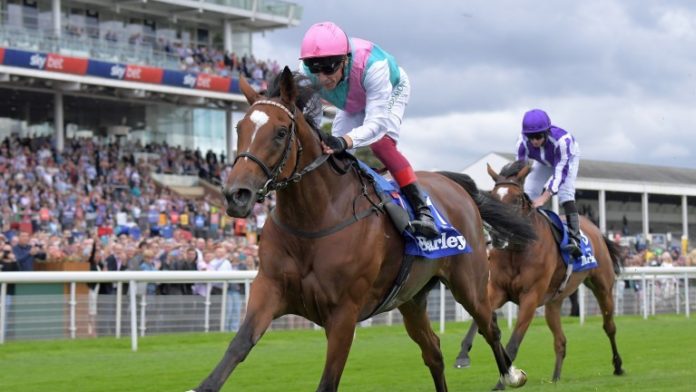 Frankie Dettori is concerned about the heavy going ahead of a historic triple bid tilt at winning the Qatar Arc de Triomphe (3.05) on Sunday on board evens money favourite Enable.

“Everything has been fine – it’s just a shame about the ground. She doesn’t much like that ground.

“She prefers the easy side of good, so she can show her class – it is going to be a bit of a slog,” said trainer Gosden.

Six-year-old Enable’s tilt to become the first horse to win the Group One Arc de Triomphe three-times could be thwarted amid the ground expected to be testing after heavy rainfall in France.

“It is drying up – it is tacky – but you might get another shower or two. It is Longchamp, by the River Seine. It is deep,” said Gosden.

Enable came within a length and three-quarters of completing her Arc hat-trick in 2019, and Gosden lauded owner Prince Khalid Abdullah’s decision to give his star another tilt more at an unprecedented trio bid.

“Let’s hope she gets a great run round. If she wins, marvellous, if she doesn’t, she couldn’t have done more for racing,” said Gosden.

“If he handles the ground, he will run a big race,” said Gosden.

Ebbing on caution, Gosden said: “Frankie has called me and said it’s pretty desperate ground. May the best horse win.”