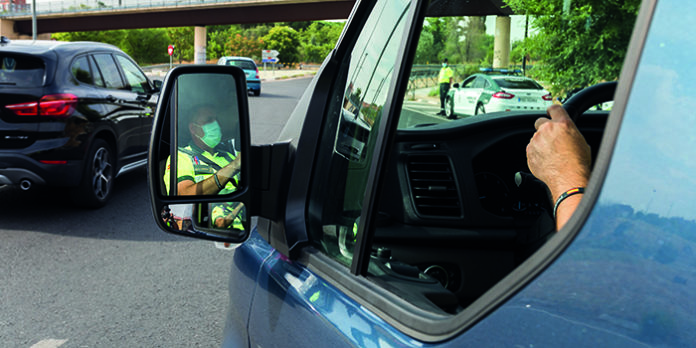 For the fourth year in a row, distractions continue to be the leading cause of fatal traffic accidents. Specifically, in 2019, distraction appears as a concurrent factor in 28% of accidents with fatalities, with 359 deaths recorded. As a result of these alarming figures, the DGT launched an awareness campaign this week which aimed at educating drivers of the dangers of distractions whilst driving, enforcing the law as necessary. The campaign was part of the annual calendar of special actions provided by TISPOL (International Traffic Police Organisation) and in which the DGT participates. In addition to the campaign running in Spain, it is simultaneously taking place in many European countries. The Guardia Civil spearheaded the campaign on the main road network, assisted by the regional and local police in urban areas. As part of the campaign, the 12 helicopters, 3 drones and 216 fixed cameras installed on the roads were used to carry out surveillance by traffic officers. As a novelty, this campaign also featured the 15 unmarked vans which the Guardia Civil traffic patrols are now using, which, because of their dimensions, allow the officers to gain a better view of the occupants of vehicles, thus enabling them to check on the use of mobile phones whilst driving, and ensuring that seat belts are correctly worn, for example. The most frequent types of accidents due to distractions are leaving the road, head-on collisions, collision with the vehicle in front or being run over.

To avoid distractions, it is important to consider the following key factors:

Before getting behind the wheel: Sleep well, do not drink alcohol or consume drugs, do not eat large meals, take care of the intake of certain medications. On the way: It is better not to smoke, if you feel drowsy, stop. Maintain a comfortable temperature: 21 or 22 degrees is an advisable temperature. Watch out for the mobile: It is an important source of distractions. Use only for emergencies and with the car stopped. It is recommended to activate the “car mode” in those devices that include it. Radio / MP3: Handling them distracts us, systems that are operated directly from the wheel are advisable. Programming stations and CDs before the trip is a good option. Traveling with GPS: Trying to program a route while traveling is very dangerous. It must be done beforehand.

Mobile: The King of Distractions

One of the main reasons for driver distraction is the use of a mobile phone while driving. Its use multiplies by four the risk of suffering an accident and the risk is comparable to driving with excess alcohol. Using a mobile phone whilst driving means taking your eyes off the road for a certain time in which you travel without the driver having control of the vehicle, since the attention is focused on the mobile. According to the latest Distractions report prepared by RACE, 96% of surveyed users admit to having seen someone talking on their mobile while driving (80% regularly) and 76% claim to use it without speaking, only manipulating or looking at it. The report details that in the case of social networks, 18% of drivers admit to having used social networks while driving, of which 12% do so regularly. This percentage increases to 17% among young people between 18 and 24 years old.

Other factors that cause distraction

Sleep and fatigue are two risk factors that are very unknown and at the same time highly implicated in road accidents: leaving the road, or certain invasions of the opposite contiguous lane are very frequent types of accidents due to these factors. Smoking and driving: lighting a cigarette takes an average of 4 seconds. At a speed of 100 km / h, in that time we will have travelled 113 meters. According to the conclusions of various research studies, smoking while driving multiplies the risk of an accident by 1.5.

What does the law say?

The Road Safety Law considers it a serious offense to use, when driving, a mobile phone device, GPS navigators or any other communication system, as well as headphones or other devices that reduce the mandatory permanent attention to driving. These infractions involve a financial penalty of 200 euro and the loss of 3 points.