José Sampere, the mayor and Sports Councillor of San Fulgencio has announced the closure of the municipal sports centre and Nuevo Cañaveral stadium, after the detection of a positive case of coronavirus among the players of the local football team, Sporting San Fulgencio.

The Consistory has closed the facilities to carry out a thorough clean and disinfection of the facility as well as the suspension of classes of the Municipal Sports Schools.

The mayor said, “the risk of contagion is not very high, since the player was only at the stadium for the friendly match that took place last Saturday, 5 September, but there will be no sport played until next Tuesday as a preventive measure ”.

The player had mild symptoms and is already receiving treatment. 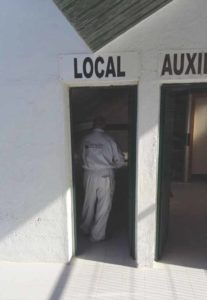 The Councillor of Health has activated the relevant protocol and has notified everyone who might have had contact with the in recent days, so that they take any necessary health measures and start their quarantine. “We are now very aware of the evolution of this case and we will be closely watching any update of the situation,” said Sampere.

The mayor said that he wants to convey a message of tranquillity as, according to the health authorities, all cases of the contagion are fully controlled.”

San Fulgencio is one of the municipalities in the Vega Baja with the lowest incidence of Covid-19, with a total of 10 cases and two deaths throughout the whole of the pandemic, and with just three active cases in the last fourteen days.

The mayor said he also appreciated “the exemplary compliance of the public with the sanitary security measures that are being carried out”, also insisting on the need to continue with these procedures “such as frequent hand washing, the mandatory use of masks and respect the safety distance” as a measure to prevent further contagion.