The latest numbers demonstrate the motor industry in Europe is slowly reverting back to normal. JATO’s data for 27 markets shows good news after several months of decline in registrations. July saw the highest monthly volume figures so far this year – this also being the highest since September last year – with the industry registering 1,278,521 new passenger cars, down by only 4% month on month from 2019.

July also saw the best monthly variation so far this year. Felipe Munoz, global analyst at JATO Dynamics, commented: “Both private and business consumers are responding to the better market conditions. If the current situation continues to improve, we could start to talk about a ‘V’ shaped recovery in the European car industry.

However, there are still huge uncertainties regarding how and when the pandemic will finally come to an end, therefore caution remains.” Volumes levels since January fell by 35% to 6.37 million cars. However, demand recorded healthy figures in countries such as the United Kingdom, Denmark and France, alongside other small and midsize markets. Much of this boost can be explained by an increased appetite for green cars, and more value offers. Munoz continued: “The increasing demand predominantly favours SUVs, with a wider offering, including more electrified versions.” 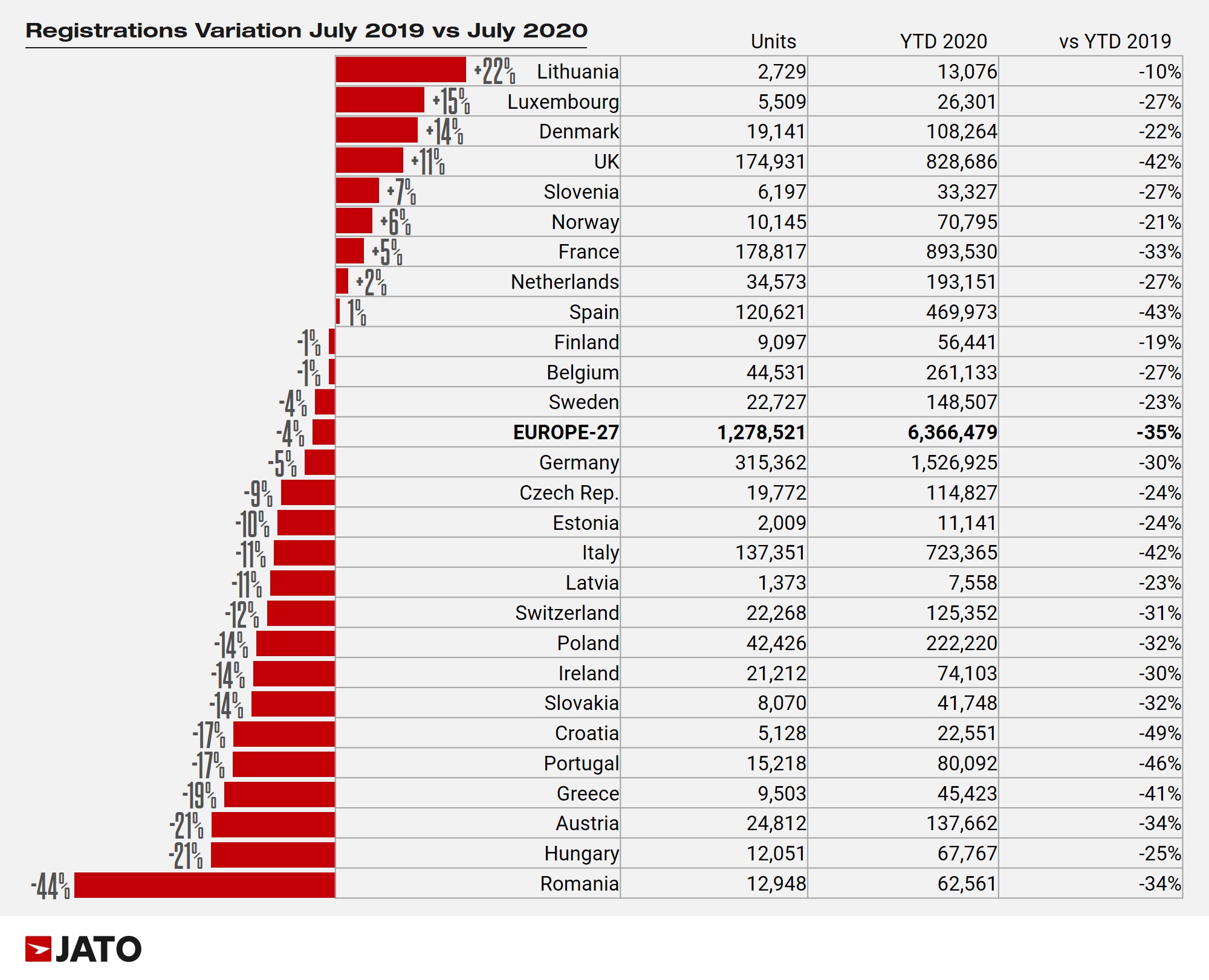 The global pandemic’s strong impact on the economy has not influenced consumer’s interest in electrified vehicles. July 2020 was a record-breaking month for EV registrations with volume up 131% year on year to 230,700 – the first time that these vehicles were bought by more than 200,00 consumers in a single month. As a consequence, EVs accounted for 18% of total registrations in July, far greater than their market share of 7.5% in July 2019, and 5.7% in July 2018. “The rise in demand for EVs is strongly related to a wider offer that is finally including more affordable choices. The higher competition amongst brands is also pushing down prices.” Munoz commented.

Half of these cars were powered by a hybrid engine (HEV), with demand soaring by 89%. The mild hybrid versions of the Ford Puma and Fiat 500 contributed to this result. Plug- in hybrids (PHEV) followed with 55,800 units, up by 365% from July 2019, and boosted by new models like the Ford-Kuga, Mercedes A class, BMW XC40 and BMW 3-Series.

Tesla posted a 76% decline to 1050 units following shipping delays to Europe, as a consequence of production challenges in its Fremont, California plant. Munoz said: “In contrast to the general trend of increasing demand for electric cars, Tesla is losing ground this year in Europe. Some of this can be explain by issues relating to the production continuity in California, but also by high competition from brands that play as locals in Europe.”

Like EVS, SUVs also showed record results. Last month, they accounted for almost 42% of total registrations to 530,800 units, posting the highest monthly volume since July 2019. “SUVs are usually more expensive than their car equivalents, so it is remarkable to see that despite the crisis, this is the only segment that has seen growth. They prove that with a competitive offer, consumers respond positively, despite the difficulties.”

Midsize SUVs were the only segment to record a decrease, of -6%, a contrast to the positive results seen from small (+9%), compact (+4%) and large/luxury SUVs (+14%). At the same time, their demand has grown fast due to the electrification of many of the models available. In July, 48% of the electrified vehicles registered were SUVs.

The greater availability of the 8th generation Volkswagen Golf helped this model to regain first place in the rankings, that was previously lost in June. However, it was not enough to offset the large drop posted by the 7th generation, as the average variation was negative. In contrast, the Renault Clio was able to record a 26% increase, as 89% of its volume corresponded to the latest generation.

You can’t be serious – The blind spot

The European Union prepares to vaccinate its 450 million citizens