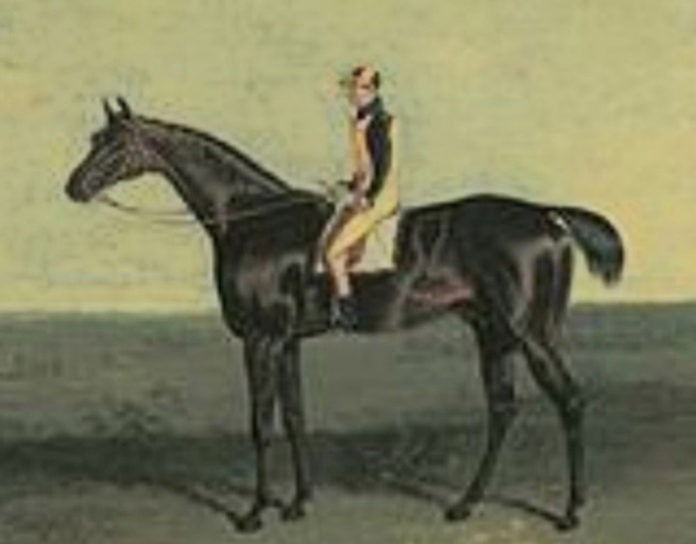 Andrew Atkinson continues a look back to prolific horse Doctor Syntax in Part 2 of an illustrious career on the turf.

Beeswing sired by Doctor Syntax won the Ascot Gold Cup as a nine-year-old in 1842.

Doctor Syntax was euthanised at Newmarket on August 28, 1838. A horse skeleton was discovered during excavations for the National Heritage Centre for Horseracing and Sporting Art at King Charles II Palace stables in 2014.

Doctor Syntax went on to win the Corporation Gold Cup at Lancaster for a second time, ahead of beating Filho da Puta in the Preston Gold Cup.

In 1817 Doctor Syntax was beaten by Silenus in the Lancaster Gold Cup, prior to beating Silenus and the 1816 St Leger winner The Duchess in the Preston Gold Cup.

At Richmond in October, Doctor Syntax finished second to The Duchess in the Gold Cup and had  a walkover in a Sweepstakes the following day. Doctor Syntax, undefeated in four starts as a 7-year-old in 1818, won a third Lancaster Gold Cup in June, and a fourth Preston Gold Cup, when beating The Duchess in July, and the Richmond Cup in October.

Following his victory at Richmond the Sporting Magazine reported: “The shouting and huzzaing defied all description and the scenes of celebration more resembled a victory in a contested Election, than a horse race”.

In 1819, Doctor Syntax won the Gold Cups at Lancaster and Preston. At Richmond he finished second to Otho in the Cup; winning the Dundas Stakes 24 hours later.

In 1820 Doctor Syntax was the subject of a painting by the artist James Ward R A, displayed at Brodsworth Hall, near Doncaster.

Doctor Syntax had four recorded races that year. On July 5 he won his fifth Lancaster Gold Cup, beating Sir Walter and the 1819 St Leger winner Antonio. A week later he won his sixth Preston Gold Cup from Comet and Sir Walter. In the autumn he won a second Richmond Cup and a second Dundas Stakes.

In 1821, 10-year-old Doctor Syntax began a rivalry with the 1818 St Leger winner Reveller. On July 4, Doctor Syntax was beaten by Reveller in the Lancaster Gold Cup, reversing the form to win his seventh Preston Gold Cup a week later.

At Richmond in October, Doctor Syntax won both the Richmond Cup and the Dundas Stakes for a third time.

In 1822, Doctor Syntax was beaten by Reveller in the Lancaster Gold Cup. In September his run of wins in the Preston Gold Cup ended – finishing second to Reveller, with 1821 St Leger winner Jack Spigot, third.

His final race was winning the Richmond Gold Cup on September 30, falling after passing the post, escaping serious injury.

With reference to Doctor Syntax’s burial: “A member of the public told us he had read that Doctor Syntax was buried at Newmarket Palace House stables,” said Curator Graham Snelling at the National Horseracing Museum.

“Then, when the skeleton was discovered, it was a potential possibility.

“Where it was buried, it would make sense. Doctor Syntax was euthanised here in 1838.

“It was a very careful digger driver that spotted the skeleton. It would be an amazing find if it turned out to be Doctor Syntax.

“He was one of most consistent racehorses of his time. He went to stud here in 1824. He was a good sire as well as a great racehorse.”

Palace House was built by Charles II in the 17th century.

Experts believe the unusual siting of the remains of the horse underneath the outdoor yard indicate it was a particular favourite of the King.

The horse appears to have been ridden, as the skeleton displays a substantial amount of wear and tear on its joints.

Archaeologist Chris Faine, of Oxford Archaeology, said: “It’s more than possible it was put to sleep.

“It was certainly a racehorse, all the evidence points to that. It could be Doctor Syntax.”