Dr. Jorge Alió has been included into ‘The Power List 2020’, drawn up by the British magazine ‘The Ophthalmologist’, as one of the 100 most influential ophthalmologists worldwide.

It is the fourth time that Dr. Alió, the professor of Ophthalmology at the Miguel Hernandez University (UMH) of Elche, has been mentioned in this prestigious publication, being one of the two Spanish doctors included in the list. It should be mentioned, that Jorge Alió has been a leading figure in this scientific magazine, which is considered to be one of the most prestigious publications in the field, since its first edition in 2014.

As ‘The Ophthalmologist’ explains at its webpage: “The Power List is back once again to celebrate the achievements of the most influential figures in ophthalmology -nominated by our readers and whittled down by our judges to the final 100. From ocular oncology to tackling neglected diseases, our 2020 Power Listers are making their mark on ophthalmology- and beyond”. Also, the magazine has clarified that this list has been created “before the scale and impact of the pandemic was known. We have decided to publish it here, in the hope that it brings our readers some much-needed joy during a very difficult time”. 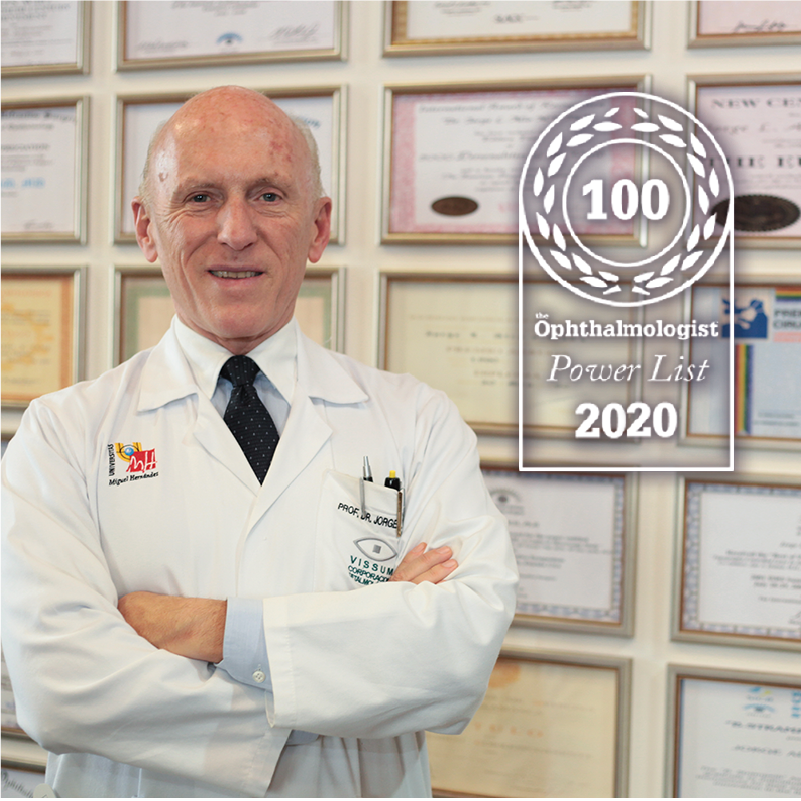 Dr. Jorge Alió has reached yet another milestone in his career by being included in the list of the most influential ophthalmologists worldwide. It should be reminded that he has also entered the ‘Forbes’ list of the 100 best doctors in Spain, being one of the six Spanish ophthalmologists.

Moreover, Dr. Alió is the creator of the concept of Microincisional Cataract Surgery (MICS) and has been a pioneer in the area of multifocal, accommodative and toric IOLs, as well as Excimer Laser Refractive Surgery and Phakic IOLs, with over 50.000 surgeries performed during his professional life.

He is currently a member of the Board of Directors of the European Society of Cataract and Refractive Surgery (ESCRS) and he has been recognized as the first international reference in the lists of experts in the refractive surgery, cataract extraction, intraocular lens implantation and ophthalmologic surgical procedures, according to the international biomedicine ranking ‘Expertscape’. Furthermore, he has been distinguished with the Alberto Sols Award for the ‘Best Research Work’.

Talking about his academic career, it should be reminded that Jorge Alió is the creator and director of the first online course in refractive surgery from the Miguel Hernandez University, entitled ‘Scientific Methodology in Refractive, Cataract, and Cornea Surgery’.

Moreover, he is a founder of Vissum Corporation and the Jorge Alió Foundation for the Prevention of Blindness, which performs humanitarian actions, such as project ‘Vision Nouadhibou’, which is devoted to the construction of the first eye hospital in Mauritania; as well as cultural initiatives such as the Painting Competition ‘Miradas’ which aims at raising public awareness of the importance of eye health and blindness prevention through art.