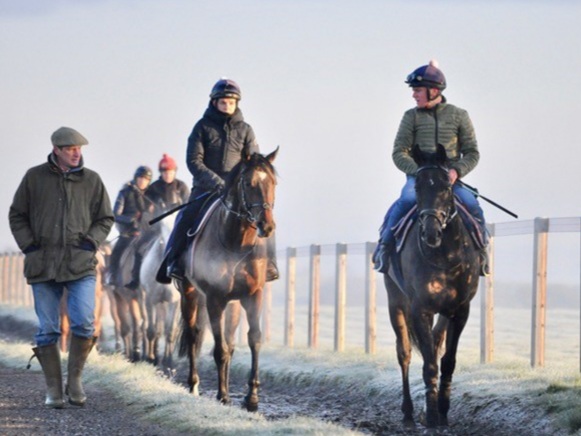 Kameko, trained by Andrew Balding, winner of the 2000 Guineas at Newmarket and Goodwood winner Khalifa Sat, go to post.

Upper Lambourn, Hungerford based Walker said of Lingfield Derby Trial winner and Derby favourite English King: “I’ve been thinking about (winning) it since I discovered horseracing –  since I was 13 years old.

“I wouldn’t run a horse in the Derby, who didn’t deserve his place – nice horses get ruined in the race.”

Walker, based at Kingsdown Stables, who took out a trainer’s licence in 2010, added: “I’m very hopeful and confident he genuinely deserves to take his chance.”

Walker and his wife Camilla have two children, Matilda and Rupert. And Walker, said:  “Whether he’s good enough? We’ll find out – he ticks a lot of boxes. I think that’s why he’s at the top of the market.”

The 2020 Derby will finally be run after being postponed, due to COVID-19 lockdown, amid the delayed Royal Ascot meeting in June and the Irish Derby. *Photographs: courtesy Ed Walker racing.

The post Ed start for Dettori – set to be ‘King’ in Epsom Derby appeared first on Horse Racing News and Tips.