La Manga resort ambassador Sir Kenny Dalglish has been pointed out by Liverpool boss Jurgen Klopp – having won the Premier League in a COVID-19 affected 2019-20 season.

“No words can explain the feeling,” said Reds boss Klopp, in charge at Anfield for four and a half years.

“To be champions is fantastic and it is for Kenny Dalglish – who had to wait 30 years,” said Klopp.

Sir Kenny Dalglish, 69, who has a property in La Manga resort, who played for Liverpool during 1977-1990, said: “It’s a totally amazing achievement.” 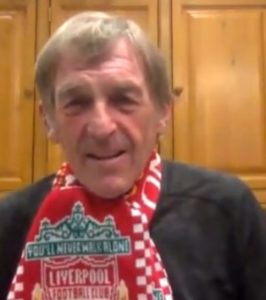 Klopp added: “It is an incredible achievement by the players and it has been a joy to train with them.”

Dalglish, who made 355 appearances for Liverpool, tested positive for coronavirus in April having been tested for COVID-19 – despite having previously displayed no symptoms of the illness.

Prior to his admission to hospital, Sir Kenny had chosen to voluntarily self-isolate for longer than the advised period together with his family.

Klopp added: “After three months interruption I am very happy. We have been covid tested every week and it’s still difficult for people.”

Liverpool legends include Dalglish, Steven Gerrard, and Ian Rush: “It’s for everybody, Kenny and Steven Gerrard. The fans. It’s not over yet – we’ll enjoy every moment – it’s more than I dreamed of,” said Klopp.

Dalglish says the most important thing is to have family with him, during trips to Spain. His wife Marina, children and grandchildren.

“All I need for a nice family holiday is a place where the sun shines, the food is good and you can relax.

“If there’s a golf course available, I won’t turn down a game. But I just like to relax with my family,” said Dalglish.

Dalglish, who has visited Cartagena for almost 30 years, amongst other areas in Spain including the quay port Cabo de Palos, said: “It’s good for golf but a variety of other activities are also available. My children loved it, especially when they were young and growing up.”