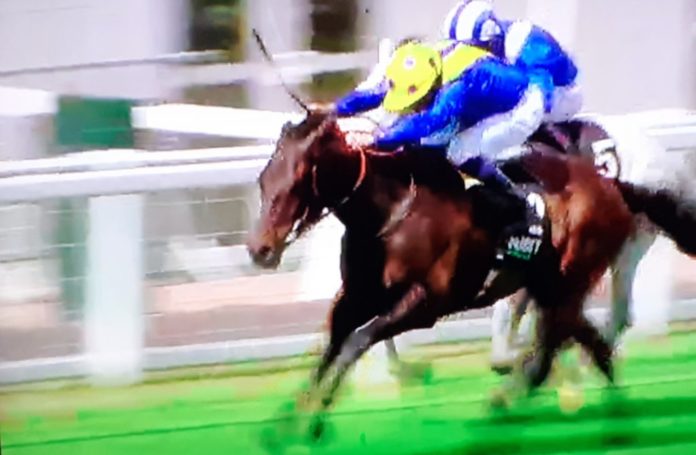 Solid Stone ridden by William Buick and trained by Sir Michael Stoute was a winning tip – under a scintillating ride from hat-trick jockey Buick – at Sandown Park on Saturday.

Despite being bumped in the 1m Claygate Handicap, fromthehorsesmouth.info headlines-tip Solid Stone (6-4) produced a fast finishing burst to gain a 2 lengths win, ahead of Muraad, with Exec Chef, third.

Richard Hannon trained Manigordo (2-11) was a winning selection at Sandown, when landing the Long Mitton Novice Stakes over 7f, under Sean Levey.

John Gosden trained Seventh Kingdom (6-5) ridden by David Egan, was tipped to win the Betway Novice Stakes over 7f at Doncaster, when beating Longlai by 4 lengths.

Gayle Force Maya (10-1) selected each-way, ran third in the Betway Casino Handicap over 7f, in a race won by Muntabab.

Jockey Levey said: “At Newmarket she didn’t handle the track and was a bit green. She has put that behind her and did it convincingly in the end. She could be a nice filly.”

“Everything went to plan, she ran a good race and I think the seven furlongs with the nice, kind ground is perfect for her. Seven on quick ground she probably finds a bit sharp.”

Nuits St Georges (5-2) was a winning selection at Sandown (4.20) under Sean Levey, riding his third winner of the meeting, getting up on the line to beat Leoncavallo a nose.

The post SOLID AS A ROCK! appeared first on Horse Racing News and Tips.