Yet again no deaths have been reported across Spain from coronavirus in the last 24 hours the Ministry of Health has published the total figure at 27,136, although it said there had been 40 deaths in the last week.

The increase in detected infections has increased to 167, compared to 84 that were reported on Tuesday. Five cases have been detected in Andalusia, fourteen in Aragon, seven in Castilla-La Mancha, three in Castilla y León, 36 in Catalonia, thirteen in the Valencian Community, four in Extremadura, three in Galicia, 62 in Madrid, two in Murcia, four in Navarra, 13 in the Basque Country and one in La Rioja.

The total number of positive cases now stands at 242,280 since the start of the pandemic. In the past two weeks, 875 people have developed symptoms of covid-19, 235 in the previous seven days.

Likewise, 139 hospitalisations have been registered in the last week, taking the grand total to 124,479: eight in Andalusia, twelve in Aragon, two in Asturias, one in the Balearic Islands, three in the Canary Islands, three in Cantabria, 17 in Castilla-La Mancha, 22 in Castilla y León, 17 in Catalonia, eight in the Valencian Community, two in Galicia, 33 in Madrid, one in Murcia, one in Navarra, seven in the Basque Country and two in La Rioja.

There have also been twelve admissions to Intensive Care Units in the last seven days (11,613 in total): one in Aragon, one in Cantabria, four in Castilla-La Mancha, two in Castilla y León, three in Catalonia and one in Madrid. 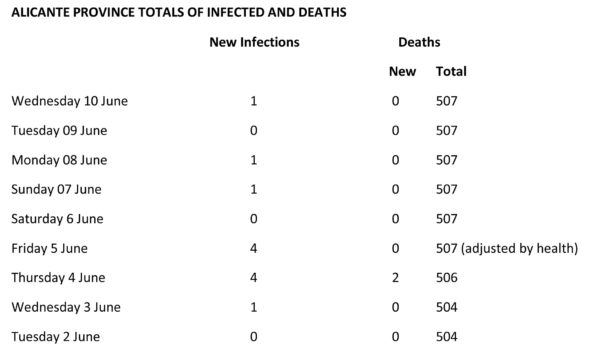 Community of Valencia and Alicante Province

In the last 24 hours, fifteen new cases of coronavirus and two deaths have been registered in the Valencian Community.

Since the peak of the pandemic, which occurred in early April, hospital admissions have decreased by 97.4% and ICU patients by 97.8%.

Discharges to patients with coronavirus in the Valencian Community amount to 13,288. Since the last update, 183 new registrations have been registered, so the percentage with respect to the number of positive cases is already 77.9%. By provinces: 1,586 in the province of Castellón, 4,662 in the province of Alicante and 7,035 in the province of Valencia.

Currently, 2,332 cases remain active, 13.6% of all cases detected since the start of the pandemic.

The number of discharges of medical staff is 2,241 and the total number of positives in those professionals at the moment is 500.

As of today there are positive cases in 57 care homes (7 in the province of Castellón, 15 in Alicante and 35 in the province of Valencia). Of the new cases, one has been reported in a resident and in four workers. In addition, another of the deaths has been in a nursing home.