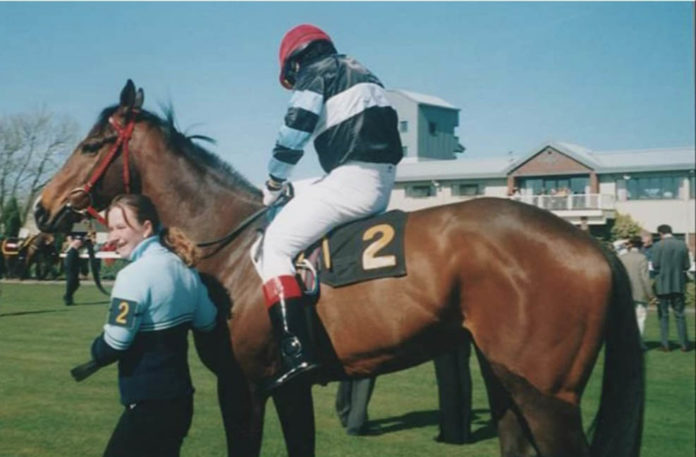 “I had great expectations going down to post on Maron at Southwell in 2002 – looking like Lester Piggott,” Gary exclusively told me.

Speaking amid the return to racing this month after the sport’s COVID-19 lockdown in mid-March, Gary said: “Riding with short stirrups, arse-in-the-air!”

Tutored by legendary Flat jockey Piggott in Newmarket, Gary who has appeared in films as Beatles lookalike and soundalike John Lennon, and performed alongside Sir Elton John and Sir Tom Jones, recalled: “Coming back after the race, having been behind the field, I looked like a 7 stone  weakling.

“It felt like a bully had just kicked sand in my face! – that’s racing. Maron looked more pissed off than me!”

Gary, who last rode out in Arizona in 2006, said: “It’s not just about winning, it’s just owning your own racehorse and riding in your own racing colours.”

On the minus side, Gary said: “Five mile runs every night – in plastic bin liners – and thick jumpers. Then jump into a hot bath for half an hour!

“Then, rise at 6.30 in the morning and drive to Jack Berry’s Stable at Cockerham to ride out a few barmy horses that nobody else wanted to ride!.

“I just wish my granddad could have been there in the Paddock, giving me a leg-up on Maron at Southwell – he would have been so proud.

“It came 22 years too late having died of cancer on March 10, 1980. Seeing me coming back into the Paddock, covered head to boots in sand, he would have said his usual two words to me: ‘Silly bugger!”.

THE OASIS BAR & RESTAURANT. We are welcoming customers to dine inside the bar, along with outdoor dining. Food order collections taken. Open: 10am until close. Food available from Breakfast 10am, through until 1pm. Afternoon snacks available. Evening menu from 6pm. Pre-orders please WhatsApp 645409436 or telephone +44 77138 5537.