The Ministry of Health has registered one new death from coronavirus in the last 24 hours, bringing the total number to 27,135 people, of which 67 have occurred in the last seven days .

In addition, 241,310 people have tested positive with a PCR test, which means 164 more in one day. Intensive Care Units (ICU) have seen 15 admissions in the last 7 days, and hospitals 169 in the last week.

Baleares, Cantabria, Castilla-La Mancha, Ceuta, Valencian Community, Galicia, Melilla, Murcia, Navarra and the Basque Country have not registered any deaths in the last seven days, according to the Ministry of Health.

Cantabria, Ceuta, Galicia, Melilla, Murcia and La Rioja are the only regions that have not registered any new cases of covid-19 in the last 24 hours.

Cases in the Valencian Community and Alicante Province

The Valencian Community hasn’t recorded any deaths due to coronaviruses in the last 24 hours, but there have been 15 new cases registered and 30 discharges.

As for new positive cases, since the update on Friday, 15 new cases have been detected through PCR, bringing the total number of positives to 11,300 since the pandemic began. According to the data provided by the Ministry, six are Castellón, nine in Valencia and none in Alicante.

There has been a total of 30 new hospital discharges today bringing the total number of patients cured in the Valencian Community to 12,789. 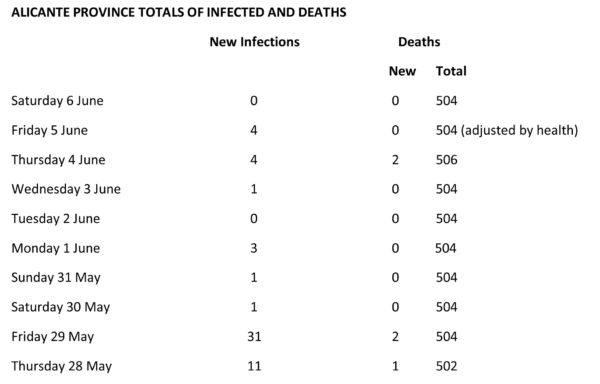